Huami has announced a new fitness tracker, Amazfit Band 5. This tracker band is very similar to Xiaomi’s Mi Band 5. But, there are some features that the Xiaomi’s own fitness band doesn’t have. Hence, we can call it an improved version of Mi Band 5.

The first reference to this fitness band appeared back in March 2020 by a website AndroidTR. They found a code in the official Amazfit app that goes by the name, Amazfit Band 5. At first, they thought that this would be the successor to the Xiaomi’s Mi Band 4, as it used its images. Another point to note is that there is no Amazfit Band 4, however, there is an “Amazfit Health Band” which was first released 3 years ago in 2017. 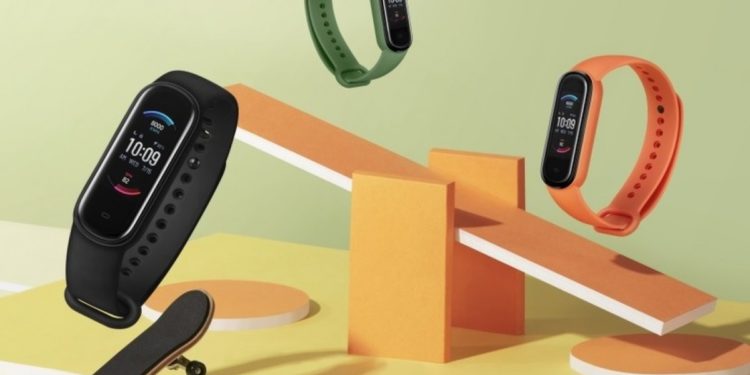 The Amazfit Band 5 comes with a 1.1-inch AMOLED display with touch support and up to 45 different watch faces to choose from. Users can also use their own images as the watch faces. The newly added SpO2 sensor which helps in the measuring blood oxygen level and features to track menstrual cycles and ovulation periods are some features that are unique to Amazfit Band 5 and not available on Mi Band 5.

The fitness tracker has 11 sports modes including both indoor and outdoor exercises such as, cycling, elliptical, swimming, and skipping. The sensor used in the band is BioTracker 2 PPG sensor which gives you 24/7 heart rate tracking which gives you a warning when the heart rate is high. There is also a sleep quality monitoring using a SomnusCare sensor, Huami’s PAI health assessment system, and stress monitoring which gives you in-detail information about your sleep.

The Band is powered by a 125mAh battery that The American company claims can last up to 15 days only on a single charge. Adding to this it also possesses 5 ATM water resistance and smart Bluetooth music control. Yet there’s no information whether this band will have NFC support like Mi Band 5.

The Amazfit Band 5 will launch in the Amazon US market on September 21, 2020, at the price of $45 which roughly translates to 3,312 INR. For now, there is no information about its release in the global market. Let us know which one you are planning to buy in the comments section.