Hitman 3’s release is scheduled for 20 Jan 2021. With just a few days left, leaks and rumors about the games are flooding the internet. We have got some leaks related to all the locations in Hitman 3. Here’s everything you need to know

Debuting the gaming market in 2000, the Hitman series has been one of the best single-player assassin games for almost two decades. Developed by Io-Interactive, the latest installment of this series was Hitman HD- Enhanced Edition released in 2019 with new content and better visuals. Now, anyone who has played any of the Hitman games would know that each mission features a new and unique location. So does this new Hitman 3. We have got all the locations featuring in IO Interactive’s upcoming game, Hitman 3.

/rGamingLeaksandRumors, one of the biggest subreddit page for leaks and rumors about games to be released has featured a post which revealed all the locations of Hitman 3. 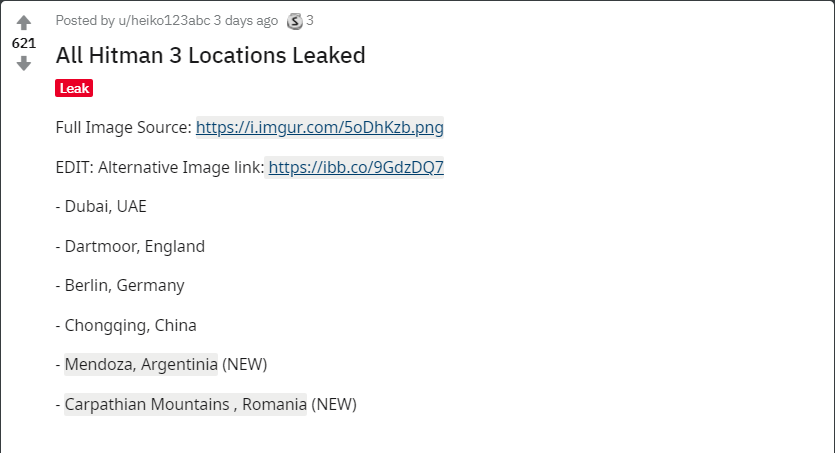 Mendoza is known for its wine regions, so there is a possibility that some missions will be based in those wine fields. Sounds interesting enough.

Also, the epilogue of the game is rumored to be set in the Carpathian Mountains, Romania.

According to rumors, Berlin will be getting a lot of exposure in the game as the majority of the plot pieces are rumored to be held in that region. Although it’s just a rumor, we think it might be true considering Berlin, Germany has been featured for the first time in this entire series.

The game will also be featuring new game modes. For more info on this, visit- IOInteractive.

Hitman fans are going to have a great start to 2021 as Hitman 3 will be delivering interesting and new content with its release on Jan 20.