Adopt Me has confirmed through their recent post that a Shark Pet is coming in the new Ocean Update, 2021. Here is everything you need to know about the confirmation:

Adopt Me is a Multiplayer Game which revolves around adopting and caring of a virtual pet. The pets are derived from hatching of different types of eggs. The pets are mainly categorized into 5 types, depending on their cost and rarity, namely common, uncommon, rare ,ultra rare and legendary. All the pets have 6 basic stages starting from their birth which are newborns, growing up into juniors, pre-teens, teens, post-teens, and eventually becoming full-grown.

The game experiences updates frequently introducing new pets and events. This time an ocean update is coming to the game which will be bringing new pets along with it.

Adopt Me, on it’s recent post on Instagram, confirmed that there is a ‘Shark’ upcoming your way. In the Photograph, shark seems to be underwater but it’s fin is visible from above. The photograph seemed quite confusing to some fans as they were not able guess the photograph correctly in the comments section. 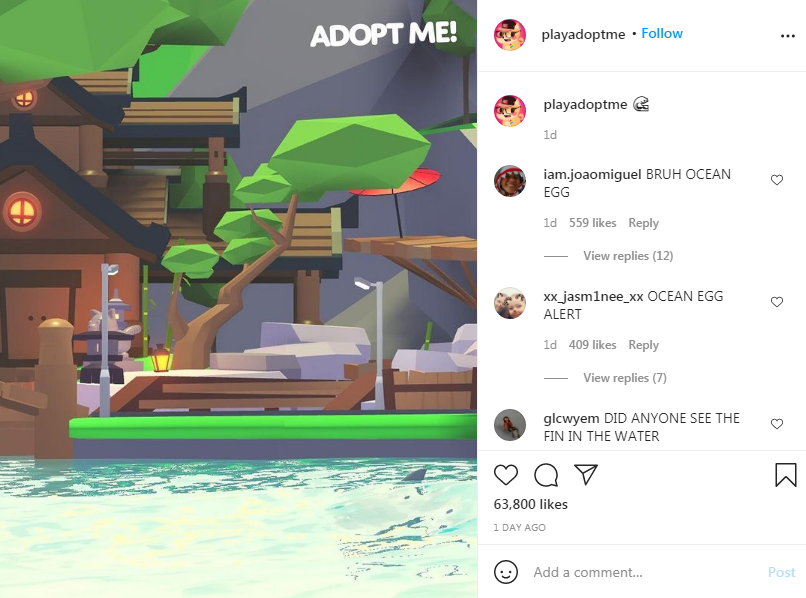 This confusion happened because of the similar color of the ocean and shark and only fin is visible in it. It could be sometimes get ignored as it is not a catchy attribute in the photograph. Adopt me has already had all their upcoming pets leaked it and Shark is included in it. You all must grab your Sharks from the Ocean egg. Ocean Egg will be replacing Fossil Egg. Fans must start saving neon pets as they will start becoming red soon as update is coming sooner than expected. Update is coming very soon as last time when Adopt Me posted a photo regarding fossil eggs, the update released after a couple of weeks. After seeing the history, we can say that the next update is coming very very soon.