Adopt Me developers have been leaking news regarding future updates throughout the week, hinting at various new features coming to the game which players have been looking forward to. They recently even released their first flying vehicles in the game, which are available for the next 2 weeks to purchase after which they will be gone, however, in their announcement on twitter regarding the planes, some have stated that there is a hidden and it is hidden in “plane sight”.  Many believe that the developers have been hinting at a new Halloween update since they have never had one before and fans are excited, we will look into what all has been provided by the Adopt Me, developers, regarding a possible Halloween update and give our opinion and prediction. 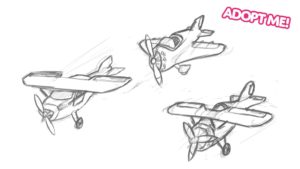 One user pointed out in the tweet’s replies asking whether this clue is hidden somewhere on the plane, and if you notice that the plane which is in the center back, next to “Adopt Me!”, its wheel looks different than the others.

This has been interpreted by many to be a clear hint at a Halloween update that will include new eggs which can be purchased by players, and receiving a Halloween egg would be quite ordinary as Adopt Me did have a Christmas egg in 2019.

Halloween is approaching closer and closer, it is rumored that the update will be released sometime around October 28, 2021, just before Halloween, and will be similar to the previous Adopt Me updates such as for Christmas.

Some fans have even gone ahead to make concepts of which new pets they would like to see, we have listed some of them below, alongside their usernames if you wish to go check their work out.

However, we still cannot say for sure whether it is a Halloween update or not as though the developers are hinting at something spooky related, they haven’t openly stated it being a Halloween update, we will have to wait and watch their next weekly update on their Twitter to see what they plan to release in upcoming updates.