10 years ago, classic Japanese RPGs were going through hard times: high-profile projects did not live up to expectations and were inferior to the masterpieces of the PlayStation 2 generation. They also lost to Western role-playing counterparts in scale and capabilities. Against this background, the original Xenoblade Chronicles, which came out on the Nintendo Wii and became one of the highest-rated RPGs in industry history, was a complete surprise.

Almost no one expected the Monolith Soft project, because, after the commercial failure of the Xenosaga trilogy, the studio focused on niche releases, most of which were not even released in Europe. Others, like Soma Bringer, remained Japan’s exclusive.

But, as it turned out, the Tetsui Takahashi team secretly prepared a revolution in the genre for four years, creating Monado: Beginning of the World, which was then renamed the Xenoblade Chronicles (as part of the overall Xeno series). It was the next generation jRPG – with a unique setting, a great story and an incredible sense of freedom.

At a time when Final Fantasy XIII disappointed with almost completely leaving non-interactive corridors, while other Japanese studios tried to repeat the projects of the golden era, copying the concept of games from SNES and PlayStation 1, Xenoblade Chronicles offered a grandiose world devoid of barriers and outdated genre restrictions. Unsurprisingly, Nintendo, inspired by the results, later threw developers to help the creators of The Legend of Zelda: Breath of the Wild.

XC was surprising from the very beginning: already in the first battle, the camera moved away from the characters and flew over the main locations of the game without glueing. The valley on the blade of a giant sword, an air city, a huge sea hovering over-dense forests and picturesque waterfalls – all this was located on the body of a dead giant and was shown without downloads – on a weak and morally outdated Wii!

The grandiose setting of Xenoblade exceeded everything that the industry was offering at that time. Something remotely resembling we experienced only in the early 2000s in Halo: Combat Evolved during the first landing on a planet-ring, which was wrapped around the horizon and going up. 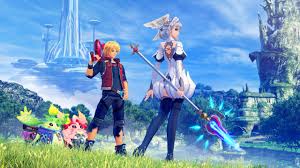 The story of Xenoblade Chronicles is closely intertwined with the concept of the game world and the capabilities of the characters. The plot tells about the war of the titans Bionis and Mekonis, who destroyed each other in a deadly duel somewhere in the middle of the vast ocean. After millennia, intelligent life appeared on their dead bodies. Now the mechanical creatures of Mekonis attack and devour the people who live on Bionis. The ancient defensive installations and the Monado sword, the legendary weapon of the first giant, help to resist robots.

The main character is Shulk – a scientist from Colony 9, which is located on the right calf muscle of Bionis. The character is studying the blade, trying to learn more about the mysterious power that he is hiding. The robotic attack on the colony forces Shulka to use the sword. The mystical glow suddenly awakens in him the ability to see the future. Predicting events, the hero tries to change fate and save the lives of other characters, deciding to follow an unusual robot in a white mask. This journey gives rise to an incredible story that constantly surprises with twists and interesting discoveries: about Monado, the past of Shulka, the enmity of two giants, the fate of mankind and the entire universe as a whole.

The developers are constantly amazed, delighting with spectacular screensavers, new characters and touching moments. Xenoblade Chronicles presents adult heroes and the most well-presented plot in the series. There are practically no silly scenes and Japanese fan service (except for some colourful samples of equipment for female heroines).

In the middle of the passage, it seems that nothing more epic can be invented, but the developers continue to delight with something new and unexpected. The denouement of the story is so shocking and unusual that it is simply impossible to guess about it. And it’s great, considering how much platitudes, without imagination, are plots in many other games.

Unfortunately, even Monolith Soft itself from the time of the first Xenoblade did not come up with anything more interesting in terms of the narrative. The plot in the Xenoblade Chronicles X for Wii U was constantly forgotten, forcing them to engage in primitive side quests (and a great exploration of a distant planet), and the Xenoblade Chronicles 2 for Nintendo Switch, for all the elaboration of the history of the world itself, suffered from obsessive fan service and scenes made for the show. At the same time, the sequel perfectly complemented the plot of the original.

Given the fact that the first part went into the sunset of the Wii generation (part of the audience was already switching to new consoles, and in some regions, the game was not available at all), Xenoblade Chronicles: Definitive Edition is a really important release for fans of the genre, which many were waiting.