If you open the Wish app, you will see a huge collection of products. The app has products starting from a 12-foot long pool floaties to whimsical toilet brush holders shaped like cherries and swans, T-shirt with a photo of the Hanson Brothers above the word ‘Nirvana” and a few varieties of cord organizers. The products have been featured as 80 or 90 percent off their original price. So you will definitely get a discount. The estimated delivery time of your product is usually between two to four weeks.

A long delivery time means that it gives the marketplace’s vendors time to ship their products from countries like China, Myanmar, and Indonesia. Wish says that in 2020, it saw its revenue getting double in comparison to 2019. It was around $1.9 billion. They earn money by taking a 15 percent cut of each sale. Wish also collects fees from sellers in exchange for promoting their products. It has also raised $1.3 billion since it was formed in 2011. Its last funding round in 2017 was valued at more than $8.7 billion.

Wish App is popular around the world as the most downloaded e-commerce app of 2018. It had around 161 million installs globally according to data from Sensor Tower. 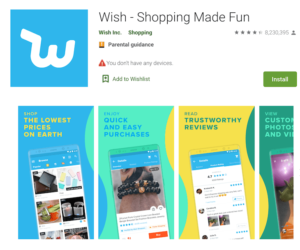 Now recently, the Wish App users have reported that they are not able to sign in to their account in the app. Most of the users said that they are unable to purchase anything unless they sign in. Some people have complained that the app claims that their login credentials are wrong. As a result that, users have also reset the passwords of their accounts. They did it multiple times and still, they are not able to sign in. Some also said that despite having a properly registered account, the app says that their account does not exist.

Till now, the developers of the app have not yet mentioned an official fix for the problem. But at first, what you need to do here is contact the customer care of the app and ensure if there is some internal server issue or maintenance work going on. If yes, then try to sign in after a few hours. If not, then remove and reinstall the app. Turn off your phone, restart it and see if the problem still occurs.