Whatsapp down (not working) : Users are having issues with sending Whatsapp images

WhatsApp Messenger owned by Facebook is a cross-platform mobile messaging app for smartphones such as the iPhone, Android phones, Windows Mobile or Blackberry. Whatsapp allows users to send and receive messages, photos, and other information and is considered an alternative to text messages or SMS.

A quick look at few comments from various people also confirms that WhatsApp is indeed going through some glitch. Have a look at some tweets down below.

@devchoudhary_dc WhatsApp is not working properly sending media as Message Images are not sending. #whatsappdown

@ichtrojan WhatsApp image service is down ?

@_defbeom Whatsapp seems to be not working… ?

@m_ming420 Is anyone else’s WhatsApp not working??

@Sebby_xoxo @wokaas3_megyimi From MTN network down to WhatsApp.. what’s next . .. Twitter can’t be loaded

@harisbinali is WhatsApp having problems?

An outage tracking website, Down Detector also confirms that WhatsApp is having an outage in several locations. Have a look at the outage map down below. 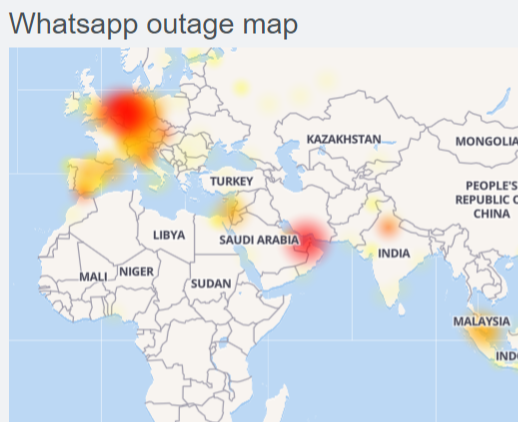 So far, there is no official response from the company representatives. We certainly hope that the issue will be resolved quickly.

The issue has been fixed now. As many users are reporting that they are able to send images and videos now.