Vivo is among the few companies that Google partners with to release betas for latest Android versions. Vivo released the beta updates of Android 11 to the Vivo IQOO 3 4G/5G back in June. They also released the second version of the beta in August. These betas are mainly intended for app development purposes and are also not very stable. A stable version of Android 11 is under development for the IQOO 3 4G/5G and going through greyscale testing. Once it is released, users will get the update through an OTA update. This information has been confirmed by Vivo Official Twitter handle. 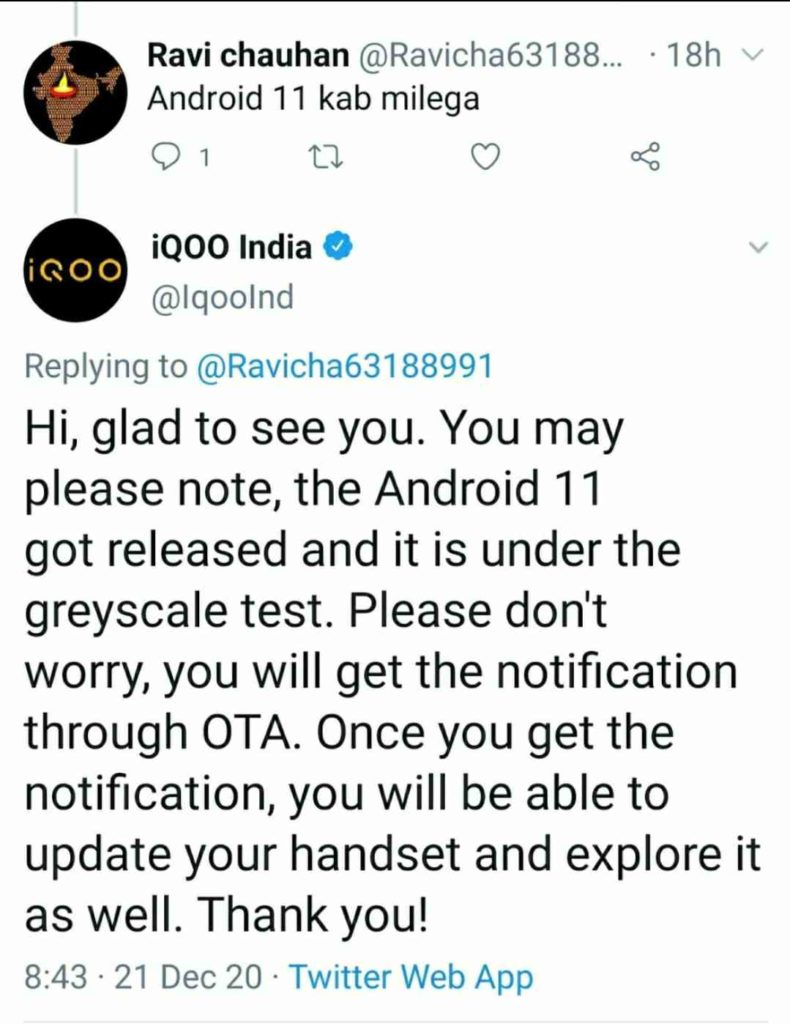 Talking about the Vivo IQOO 3, it is a phone which was developed with gamers in mind. It has shoulder mounted customisable buttons for use while playing games, a ‘Carbon Fiber Vapour Cooling System’ which helps to keep the temperature low of the powerful internals of this phone. Under the hood, IQOO 3 has the Snapdragon 865 with options of 6 to 12 gigabytes of RAM and 128/256GB internal storage. It has a battery capacity of 4400mAh with 55W fast charging support. Cameras aren’t really the focus while buying gaming phones but it has a triple camera setup on the back (48+13+13) and 16MP camera on the front. Also, the front houses the 6.44 inch, super-AMOLED full HD panel with 409ppi which disappointingly has a refresh rate of just 60hz. But there is a 180hz touch sampling to detect action and try to to fill the void of a less refresh rate display. The phone does not have a very flashy design, instead looks classy which is a design choice people may like. It also has a AK4377A independent audio chip with Hi-Res audio certification for the best audio experience while gaming on this beast.

Black Ops Cold War: How to get Zombie Mode LW3 weapon blueprint on PS4 and PS5?

Genshin Impact Event: The Chalk Prince and the Dragon Rewards- How to get Summit Shaper?

Genshin Impact Event: The Chalk Prince and the Dragon Rewards- How to get Summit Shaper?