Updating Samsung Galaxy Z Fold 2 To Beta Version of ONE UI 3.0 will stuck you at lock screen

The South Korean Multinational company Samsung has been doing wonders in field of innovation and technology. The company launched its own custom UI known as One UI back in 2018. The most recent version One UI 3.0 was launched earlier this year in August. It was initially limited to Galaxy S20 series but the company promised to launch its new UI to more devices.

A popular tipster & Twitter user “Cozyplanes” has posted a number of threads earlier today regarding the issue faced by users due to One UI 3.0 beta update on Galaxy Z Fold 2 devices earlier today. Have a look at the twitter thread: – 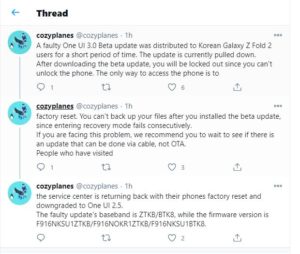 According to the thread, the Galaxy Z Fold 2 Korean users are facing serious issue after installing the new One UI 3.0 beta update. After the beta installation, the device has got stuck at the lock screen and you can’t go pass it. The bug is reported by a large number of users in the South Korea and it is recommended not to update to beta as for now.

The thread also confirms that the lock screen issue beta firmware is distributed only to Korean users for now. But for security reasons, it is advised for users across the globe not to opt for One UI 3.0 beta update if you own a Galaxy Fold 2 device.

A picture has also surfaced online where a large number of users are seen waiting outside the Samsung Service center. 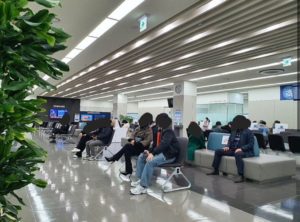 The only solution for this problem is to Factory Reset your device. If that doesn’t work, you need to visit the nearest Samsung service centre to figure out the issue. The service centre will be returning your device after factory resetting and downgrading the One UI 3.0 to 2.5.

Samsung has also announced an emergency halt of the distribution of the firmware versions listed below: –

Talking about the new UI 3.0, it features Always on Display (AOD), Samsung Dex, Digital Wellbeing, Quick panel, parental controls and many more. Some improvements and optimizations in Home and lock screen, camera, etc has also been made.