Who does not loves UNO? It is the most loved card game in this world. Found in 1971, UNO has never looked back since then. One can never get bored of UNO. As we have discussed earlier, how and where one can play UNO multiplayer, we will not repeat that. in this article, we are going to discuss some good DLC (Downloadable Content) stuff which has released on the occasion of the 50th anniversary of UNO. There is a lot of stuff that has been introduced on this occasion. Keep reading to know more.

Just like we celebrate the birthdays of our relatives when they turn 50, UNO has also started its celebration. During this celebration, UNO is offering various DLCs. Firstly, UNO has introduced a new 50/50 card in the game. This card comes up with different rules and features. When a player plays this card, a coin would be tossed to decide whether the person has to draw 4 more cards or not. Along with it, a brand new black velvet theme is also introduced in the game. The theme of all cards is turned black. You can look at the snippet below for a reference. 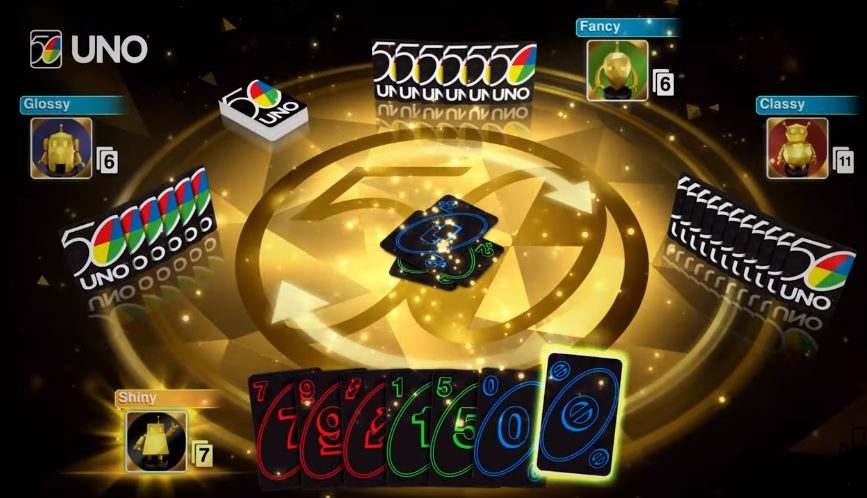 As you can see in the above snippet, that the board is also renovated to a black-golden board. for UNO 50th Anniversary. The DLC stuff also includes other themes and goodies as an add-on. It includes a free winter theme and Rabbids DLC. Also, UNO FLIP! And DLC based on Immortals Fenyx Rising, Rayman, and Just Dance 2017 are included. UNO and the 50th Anniversary DLC are available now on PS4, Xbox One, Switch, PC, and Stadia. If you are playing on PS5 or Xbox Series X|S, you would have to play via backward compatibility.

We hope that you found this article helpful.