Unable to reach Blink cloud : How to fix it?

Blink refers to a home automation company. It produces battery-powered home security cameras. Blink was established in 2009 by Peter Besen, Don Shulsinger, and Stephen Gordon. At first, the company started as Immedia Semiconductor Inc in 2009. It was later pivoted into a consumer electronics company. In 2014, Blink had a Kickstarter campaign for their indoor security camera that raised over US$1 million. Later, the company also announced an outdoor security camera, home security system, and video doorbell.

Blink was acquired by Amazon in the year 2017. Amazon officially made the announcement. But Immedia Semiconductor, LLC has continued to work as an independent subsidiary. It has been anticipated that the technology of Blink will be used for the Amazon Key service. Amazon started to roll out patches as a response to research citing vulnerabilities in the Blink XT2 security camera systems found by vulnerability detection firm Tenable.

The Smart Home Security Cameras and Systems of Blink starts at a price of $34.99. In today’s world, people are very much concerned about the security of their homes. In this situation, they can choose Blink products in order to strengthen their home security system. 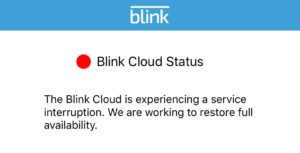 However, users have recently reported a problem related to Blink camera systems. Users said that they were not able to reach the Blink cloud. A user said that Blink is having some issue with its cloud service. He said that the cameras don’t work anymore. He didn’t get any notification that might have informed him that the communication was down. He said that there was nothing wrong with his internet since he was able to watch TV content for the whole night.

Another user said that his system was armed on one day. When he came home and went to disarm, he received an unauthorized error while opening the app. The cameras were also not recording anything. He didn’t even receive any notifications. In case if you are facing a similar type of issue, there are a few things you can try to fix it by yourself –

Roblox: How to get set of Pyjamas

Roblox: How to get set of Pyjamas