This hasn't been officially confirmed though

Over the past few years, the resurgence of AMD in the desktop CPU segment has been cause for great excitement among the enthusiast crowd. AMD’s stellar offerings have provided a refreshing change from Intel’s incremental improvements and their monopolistic hold on the market. So, it was not quite a stretch for fans to expect AMD to do the same in the discreet GPU phase and bring some competition to Nvidia. And with the hugely successful launch of the RTX 3000 series (Do let us know if you are one of the lucky non-bots to have snagged an RTX 3080), there is more pressure than ever on AMD to deliver with its Radeon RX 6000 series graphics cards. 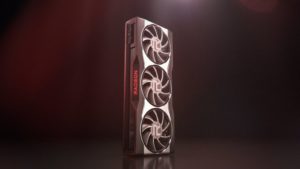 With the launch date inching ever closer, there has been a steady release of leaks and rumour to keep us busy. AMD has already unveiled the design of its RX 6000 series and to be honest, it does look like a mean piece of tech. These news GPUs are going to be powered by AMD’s new RDNA2 architecture. And recently we have come to know a little more about them thanks to Twitter user @rogame. 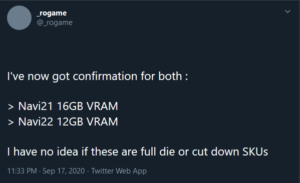 His tweet has revealed the memory configurations for two Navi 2X GPUs based on the RDNA 2 architecture. The GPUs are the Navi 21 and the Navi 22. The Navi 21 will feature 16GB of VRAM and the Navi 22 will have a 12GB of VRAM. He also goes on to say that it is yet unknown if the two variants will be based on full dies or the cut-down variants. This seems like an interesting bit of news and the plentiful amount of VRAM should give AMD a fighting chance against this year’s exceptional RTX 3000 series.

Zenfone 7 Pro to recieve AR Core Support in next update