As we approach the climax in this chapter, we see the arrival of the shadow army and Tusk the orc shaman carrying the orb of avarice. So, as you may know, Tusk is the first elite shadow to have appeared in the series. He was known as Kargalgan, the former boss of an A-rank dungeon slain by Sung while rescuing Hunters guild. After Jin-Woo made him a shadow we have seen some cute traits of this shaman and you can expect more to come in the future. Jin Woo warned him not to burn the humans else he may be grounded.

As the fight began, we see Tusk using shaman magic and two of the Zodiac hymns along with the help of orb of avarice. The eyes of the hunters were filled with utter disbelief as the saw the shaman turning into a giant(hymn_1) and generating torrents of flames(hymn_2) that burnt the ants similar to creating fried chips. In front of the hunters, Tusk seemed more like a demon king. If you remember even Jin-Woo gets wary of his powers in the last demon castle arc. 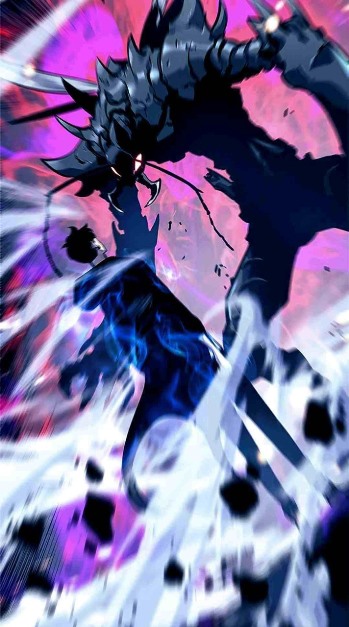 Then, we see the ant king grew pale almost as if he saw his death right in front of him. For the first time, we see him terrified. The fallen ant king figures out the only way for him to survive and that is run-away. His pride in being the strongest one was utterly shattered. Desperately the king tried to run away but Jin Woo used dominator’s touch and caught him and delivered the final blows. System notifications popped up that he leveled up twice. These happy moments are short-lived as the hunter Baek approaches him saying, hunter Cha is nearly dead.

Then, we see Sung Jin-Woo trying his best to save the fan’s expected waifu. As he tries to think of ways to save her he called upon the soldiers to search for dead S rank hunter Min’s body. Then he used shadow extraction on the headless Min Byeong’s body brought by the shadow orc. On his third attempt, he succeeded even though he didn’t want to make a human shadow soldier. The chapter concluded with everyone knowing the real skill of Sung Jin-Woo – necromancer aka shadow lord aka controller of the undead. Although hunter Cha will be saved what about the ant king will he become the shadow soldier? And what about Sung Jin Woo’s real abilities now revealed? Will this pose a threat in further chapters? What will be the reactions of other hunters? We can expect to see the interference of other nations in the later arcs.

Till then stay tuned. Blast your theories into the comment section. And do not forget to support the creators and translators. Only read from the official sources or buy them if available. The next issue would probably be translated by 13th February.

Solo Leveling Chapter 105 Where to Read:

PES 2020 Club Selection ROMA | Agents and other details of club