It’s been more than a decade since the last entry of the Skate series kickflipped its way into our hearts; its revolutionary flick control scheme, open-world skateboarding utopia, fisheye handheld third-person camera, photography & videography, and (for better or worse) the fun little glitches are what make the Skate games such a joy to play.

Skating has gradually faded away from being one of the dominant sports in this world. Everyone remembers getting their first skateboard, that first fall, and all those bags of tricks we picked up in our daily run with our skateboards.

Skating games were first introduced on mobile platforms only. Simple game codes in java succeeded in creating that virtual feel of gliding up and down the roads of hilly terrain. Just like other genres, skating games did receive that huge boost of realism and improvement in gameplay as EA sports took over in producing skating games named the “skate” series. 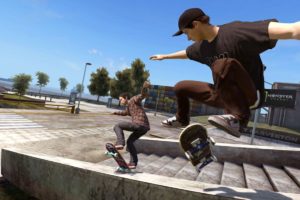 Fasten your seat belts as the Creative Director and Games director of EA have announced that a new skate game “Skate 4” will be added to the series and would be released soon, however, no official dates have been released yet. Even nothing has been mentioned about the details of the game. Maybe the game is still in its initial phase of development, however, then it will be worth the wait. The development team “Full circle” are working hard on this game since January 2021 after the great success and an amazing response from the fans for “Skate 3” that was released in the year 2010. The team aims at increasing the engagement of the players at all levels, including the development stage, the release stage, and even after that. The existing series had some of the coolest features like recording, editing, and sharing their tips and tricks to all the other players out there.