Note: New updates are being added at the bottom.

Original post (Jan 7): Samsung introduced the new generation Galaxy A-series at the starting of 2019. Galaxy A40 was launched back in March 2019 with a list of upgraded features and new tear-drop notch display. The device launched under the Rs.20,000 price tag in India with some promising features and quality. The device was initially launched with Android 9 Pie out-of-the-box and still, the owners haven’t received updates for Android 10, which was launched in 2019 Q4.

Recalling Samsung Galaxy A40 features, the device comes with a 5.90-inch display with a resolution of 1080 x 2280 pixels. The device is powered by in-house made Exynos 7885 processor which is coupled by a 4Gb RAM for hassle-free operations. Galaxy A40 features a dual-rear camera setup featuring 16MP primary camera. A battery capacity of 3100mAh is given for all-day-long usage.

Coming back to the Android 10 update status of Samsung Galaxy A40. A40 owners will be happy to know that they will be getting the Android 10 based One UI 2.0 update along with other Samsung devices. The Korean smartphone vendor has officially released the roadmap for Android 10 update. The list includes the flagship Galaxy S-series, A-series and other mid-rangers too. The new update has started to roll-out for Galaxy S and Note series.

The Android 10 based One UI 2.0 update will make its way to the flagship series in the month of January and after that other Samsung, smartphone series will be getting the update. Talking specifically about the Samsung Galaxy A40 Android 10 release date, the update will start rolling out in April 2020.

Well, the new Android 10 update will roll out along with the security patch update, so, you can expect the update in the first week of April.

As per some users, the Samsung Galaxy A40 One UI 2.0 (Android 10) is now rolling out. The update is about 1.7 GB in size. Apart from all the features of Android 10 and One UI 2.0, the update also comes with the March security patchset. 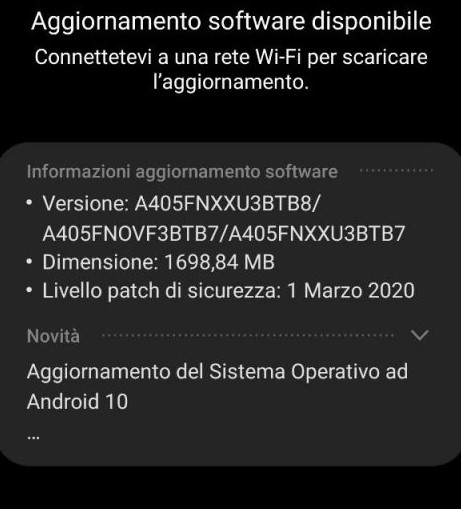 Note: The update is rolling out in Italy. More regions are expected to get the update soon.

Samsung Galaxy A40 is not getting the Android 10 update is UK:

One UI 2 on Galaxy A40 in UK from samsunggalaxy

Note: Stay tuned! We will update the post with the latest news related to the Samsung Galaxy A40 Android 10 update