This page of the Resident Evil 3 Remake guide contains a detailed solution to the puzzle with Clock Tower Commemoration from the metro station. You can take care of completing the clock puzzle shortly after starting the game – it is awarded a trophy and several valuable items.

Where is the Clock

The clock in question is located in the Subway Station room, which you can reach right after exiting Redstone Street Station and on your way to the Downtown region. This is the area explored just after completing the prologue and meeting Mikhail in the subway car for the first time. You can interact with the clock and find out that it is incomplete – you need to bring three gems and put them in the mechanism. You can find crystals in any order.

The red gem is in the Donut Shop. You have to go to the Kitchen, which also has a game-saving machine and an item chest. Pick up the Fancy Box. Open the inventory and decide to view the box – select the Examine option. Rotate the box to see its front part and to be able to open it. You will find a Red Jewel.

If you want you can immediately return with the jewel to the clock. Interact with the crystal and select a gem from the inventory. Jill will automatically put the gem in one of the slots. The stash will open and you will win the first prize – Hand Grenade grenade.

You can obtain the blue gem only after you have obtained Bolt Cutters – if necessary, see a separate guide page about them. You must break into the supermarket on the main street by cutting the chain with pliers. The box with the Blue Jewel is inside the building.

Return to the clock and place the blue gem in it. The second prize is the improvement of the Tactical Stock Shotgun. 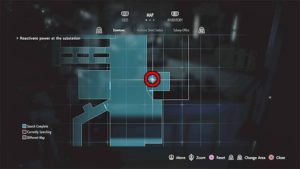 You can obtain the green gem only after you get the Lock Pick lockpick – if necessary, see a separate guide page about it. You must break into Toy Uncle, which is on the opposite side of the road from the supermarket described above. The store has a yellow padlock on the door that opens with a smudge. The place where you can find the box with the Green Jewel is shown in the pictures above.

Return to the clock and place the green gem in it. The third prize is a Hip Pouch hip bag, thanks to which the inventory will permanently increase by 2 slots. As a reward for solving the puzzle, you will also get a silver Power Stones trophy.