The Chinese smartphone manufacturer Realme has recently launched its 6th generation of Smartphones the Realme 6 and Realme 6 Pro. Both the smartphones offer maximum specs to price ratio. Some notable features smartphones offer are 90HZ display, 64 Mp main camera, 30W fast Charging and a lot more. The company is now gearing to launch Realme 6i – the low budget smartphone. Realme 6i was recently spotted on the Geekbench with model number RMX2063.

Now, a device with the same model number is being listed on the Wifi certification website. The smartphone has dual-band Wi-Fi (2.4GHz and 5GHz) connectivity support and runs on Android 10 (Q). Check out the details below.

Falling in line with the earlier leaks and Geekbench listing, Realme 6i will be housed with the MediaTek Helio G70 Chipset coupled with up to 4GB of RAM. As it can be noticed in the image below, the smartphone scores 345 points in the single-core test and 1,293 points on the multi-core trial. 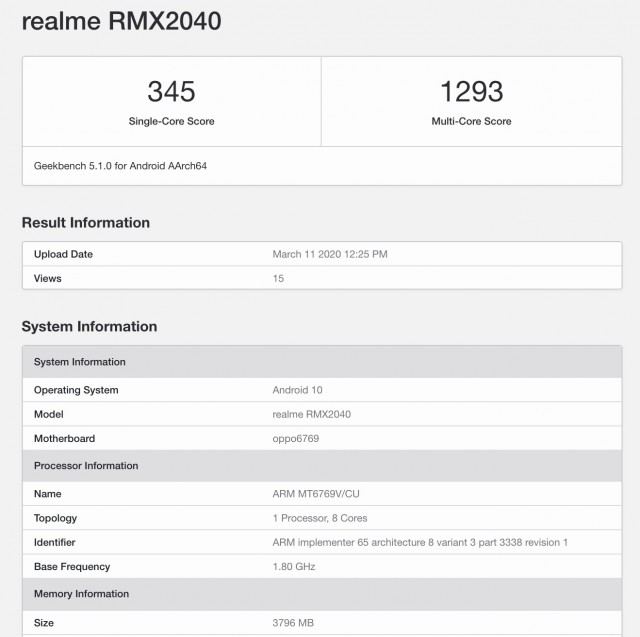 As per FCC listing from a few weeks ago, Realme 6i with feature a waterdrop notch style display, and it will be equipped with 4 rear camera with a 48MP camera as the primary sensor. It will be fueled by a massive 5,000 mAh battery with support for 18W fast charging.

Another Geekbench listing shows Realme 6i ( RMX2063) with 8GB of RAM. Here the smartphone managed to score 570 points in single-core and 1,683 points in the multi-core trial.

The dates regarding updates and device launches have been constantly changing due to deadly calamities around the world. This has been resulting in the late reveal of launch dates and official announcements. But rumors have been hitting the web that the Realme 6i will be available in the stores from the 18th of March 2020.

Note: We will update the article when we receive any news about the Realme 6i, so stay tuned. Also, share this article with all those who are waiting for this gadget.

Rainbow Six (6) Game servers Down (not working) for many users

Rainbow Six (6) Game servers Down (not working) for many users