Emma’s team finally rescued everyone and now trying to escape from Grace Field using a secret passageway. The raw scan page for chapter 166 of manga ‘The Promised Neverland’ just dropped.

So in this post, we are going to talk about ‘The Promised Neverland’ Chapter 166 release date, raw scans, and spoilers. We will be looking at the spoilers now so if you do not like them you can scroll further down for more information on the release of the upcoming chapter.

Let’s first discuss chapter 165 of ‘The Promised Neverland’. We finally get the flashback of what actually happened to Isabelle after Emma and others escaped from Grace Field 2 years ago. After two days of the event, Isabelle was locked up in a cell. But later got released because she could be very useful for someone like Peter.  We find out that it was Peter who actually freed Isabelle again and later made her Grandma Isabelle from Mother Isabelle of the Grace Field. The rescue operation started by Emma with full preparation after infiltration in Grace Field. 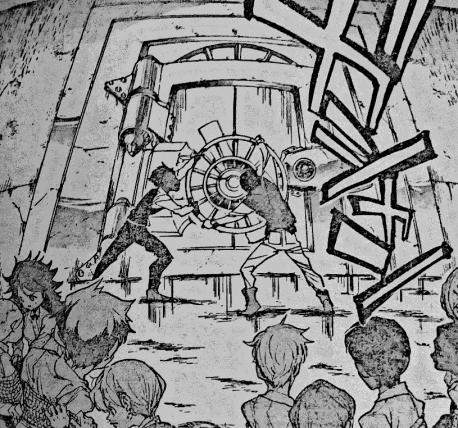 In the raw scan page, we can see that Emma has successfully rescued the children and now they are trying to leave the Grace Field from some secret passage or tunnel. It will be interesting to see how actually she did this.

We may be happy that they are finally free but there is always a possibility that this might be a plan of Peter, to lure Emma in, and trap her if she hasn’t dealt with him already before coming to the children. Peter needs Emma to know about the reshaping of the new promise at the seven walls.

We can expect a very good chapter after a break. The story is getting more and more interesting to read. Many mysteries, yet to unpack in upcoming chapters, keep reading.

The usual release schedule for the Manga releases a new chapter on a span of 7days. But due to the delay, it’s one week late this time. So chapter 166 is scheduled to be released on the 9th of February 2020.