Poco is a sub-brand owned by Chinese OEM Xiaomi. Poco has launched only two devices to date. The Pocophone F1 is the very first iteration of the Pocophone lineup. The Poco F1 set fire in the smartphone market within days after its launch. The device was launched back in August 2018. The Poco F1 offers an extremely amazing value for money and is filled with some great specs. More or less the Poco F1 is a budget flagship. 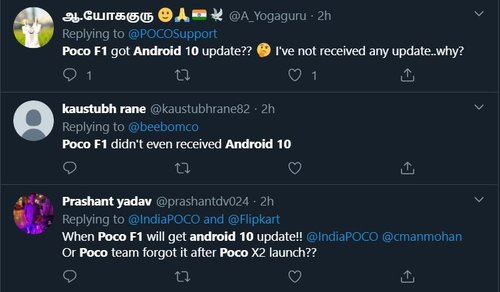 The Poco F1 boasts a 6.18 inch IPS LCD Display with a resolution of 1080 x 2246 pixels. The device is powered by the very powerful Qualcomm SDM845 Snapdragon 845 chipset. It comes in several variants with up to 8 GB of RAM and up to 256 GB of storage. The smartphone recently got updated to Android 10 with MIUI 11 on top. The device is powered by a massive 4000 mAh battery with support for 18W Fast Charging. The battery can power the device throughout the day with just a single charge with sufficient ease.

Talking about the camera, the device features a dual-camera setup at the back with a 12 MP sensor as the primary camera and a 5 MP camera for depth sensing. On the front, the device has got a 20 MP camera for shooting some beautiful selfies. It’s very peculiar of Xiaomi, how they placed a better sensor on the front than the rear camera at the back.
The smartphone comes with all the major sensors and sports a rear-mounted fingerprint scanner. The device also features a Type-C 1.0 reversible connector.

Brace yourselves up if you own a Poco F1 because today we bring with us the most anticipated news for all you guys out there. Well, users have been recently speculating a lot about the Android 10 update for their devices. The Poco F1 had been missing out on the latest Android 10 update. Poco f1 users have been asking the possible dates for the update. Here is the current status:

The Poco F1 had started to receive the Android 10 update and some users had already received the OTA update but the update wad rolled back due to some critical bugs present in the update. Since then users had been wanting to know when they will get a proper stable Android 10 Update for the Poco F1.

Poco India General Manager has officially announced in a recent twitter post that they are working on the rollout of the Android 10 Update and said users to wait for some time to receive the update.

Users not able to wait any longer kept tweeting and Poco India General Manager C Manmohan took to twitter again to state that they would need some time to deliver the update considering the current situation in China. So, the Android 10 Update for the Poco F1 would take some time to be finally rolled out. Unfortunately, users have to wait until then.

Stay tuned for more updates on further developments on Pocophone F1 Android 10 Update. Share this article to all those who have been waiting for the update.