A series of events happen so that all the Straw Hat pirate is assembled at one place, ready for some major action, and beat the everloving shit outta Kaido’s troops, currently, it looks like their target will be King and Queen if Big Mom doesn’t interfere again of course.

In the last chapter, we saw Minks in their sulong forms fighting Jack and the troops he brought there. Momo got freed by Sanji and Shinobu, Sanji got into a fight with King but King pushed him out to a wall using his attack in Pteranodon form. And at the end of the previous chapter, Big Mom was attacking Luffy and Nami but Franky and Brook ram a motorbike on Big Mom’s Face. Franky must have balls of steel to do that to a freaking Yonko. 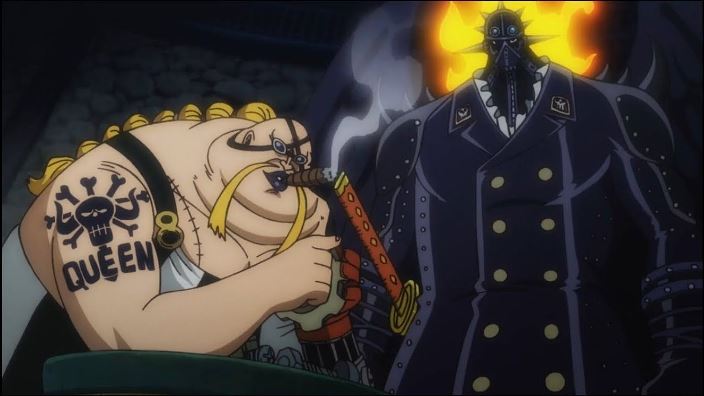 Let’s now discuss the raw scans of this week’s chapter. Nami tells Franky to run after what he did to Big Mom, but he refused and stood on the ground to fight. He is about to shoot a beam at Big Mom but three more numbers arrive there. Numbers are a failed version of ancient giants that Kaido brought from Punk Hazard. One of the numbers is holding Brachio Tank with Chopper and Usopp. While Robin and Jimbei try to push back Big Mom, Franky is ready to assemble Franky Shogun (it’s super!!! time). Sanji is also fine thanks to his suit. Luffy meets Zoro on the way to Kaido, but Queen throws them down to the ground, and King with flying gifters is blocking the way to Kaido.

The latest chapter was released on the 24th of August 2020. And since it was on a break, the next chapter is scheduled to release on the 6th of September 2020 on the official sources like Viz.com.

WHERE TO READ ONE PIECE CHAPTER 989 –