If you are trying to access the United Airlines website and it is not working for you. Fret not, you are not alone as many users are also facing the same issue.

It seems that the @UnitedAirlines and @AmericanAir websites are having issues. NO FLIGHTS from DEN-ORD in December or January? Tough business model for an airline.

@united is your site down? Trying to book a flight. Nothing comes up.

An outage tracking website, Down Detector also confirms that the United Airlines website is indeed going through some glitch & outage in several locations. Have a look at the outage map down below. 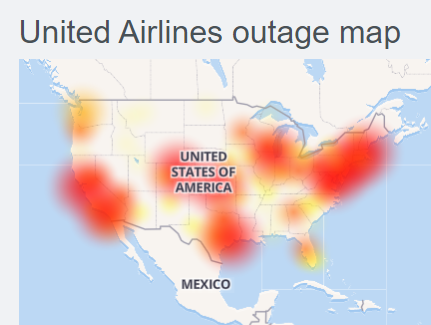 So far, there has been no official response from United Airlines officials. But we certainly hope that their team is looking to resolve these issues at the earliest.

Let us know below in the comments if you are also encountering issues with the United Airlines website.

United Airlines is aware of the issue with its website/App and their team is working to fix it.

Hi Brett, apologies for the inconvenience. We've received an update that the flight search functionality on our website and mobile app is unavailable at the moment. Our IT team is working to resolve the issue. ^JM

American Airlines website down (not working) for many users

My FitnessPal App down (not working) for many users

My FitnessPal App down (not working) for many users