If you recall, Pokemon Sword & Shield announced its first mythical Pokemon from Generation VIII- Zarude as part of Galar Pokedex on February 27, 2020. Zarude is also set to make its anime debut in Pokemon The Movie: Coco. It is not known when the Pokemon will be added in the game, but news information reveals a move the pokemon can learn.

Zarude is a Dark and Grass-type Pokemon. It is known as  the ‘rogue monkey Pokémon’ and has the following statistics:

Its description can be read as :

“It can grow vines from the back of its neck, its wrists, and the soles of its feet at will. The vines are strong and flexible. They can be used to wrap around tree branches to move around or to grab Berries from distant branches. They’re useful for many different situations. The vines also have a healing property. If the vines are wrapped around a wound, it will heal.”

“Zarude lives in a pack deep in the heart of dense forests. It treats anyone that isn’t part of its pack with immediate hostility, attacking right away. This is why other Pokémon that live in the same forest are afraid of Zarude. When fighting, it swings around using trees and their branches, attacking relentlessly with its sharp claws or any other means it has. Its quick wit helps it excel in battles.”

During the reveal, The Pokemon Company teased the Pokemon in his fighting and standing stances. 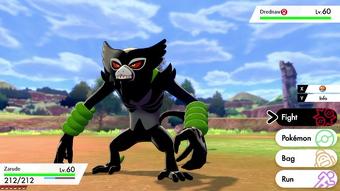 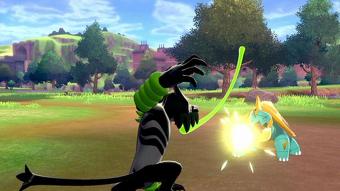 Now, a piece of new information regarding the Pokemon reveals a move it can learn. According to Serebii, if you raise Zaurde to level 90, it will get a new Grass-type move called Jungle Healing. This move will provide some recovery. Full details on the move are not currently known.

We will update you once more details will be up.