Growing tension was observed among cellphone users in the United States. Many carrier providers have released the mandate that most of them are looking to do away with 3G. Owing to this many users had queries that remained hugely unanswered. The Motorola admin took to its responsibility and put up a post on the Lenovo Forum in order to shed some light on this. In the post, he shares a breakdown on the major US carriers regarding VoLTE and VoWiFi. 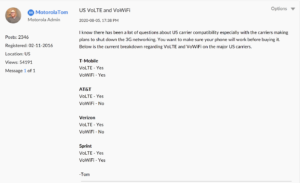 The list mentions popular US carriers like Verizon, T-Mobile among the others. As per early reports, the 3G services by Verizon should have been barred earlier this year, but there seems to be a U-Turn on this. The advancements in the smartphone industry have been such in these times that a decision like this wouldn’t bother most users. Motorola released its flagship Edge series in April this year. Motorola Edge Plus happens to be a contender to the heavyweights like Samsung S20 and iPhone 11 Pro. The Edge series comes 5G enabled. The below link will redirect you to the Lenovo Forum where the Motorola admin has posted about these carriers.