All the season 6 leaks you should know about!

There has been a massive confusion about season 6 of Modern Warfare. Time to time leaks and rumours have told that there is not going to be a season 6. Since the release of season 5 reloaded some glimpses have been given away that what can we expect in the latest season. But Modern Warfare has always been sneaky about its new updates and releases as we can see much unreleased content of the game in the library of its program files. 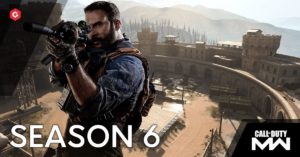 Warzone Season 6 is going to bring a lot with it i.e. new battle pass, new maps, new characters and new weapons. Although there has been no clarity or hint about the multiplayer maps but it seems that it has been on Modern warfare’s cards since last season. As of now, It is obvious that the title character of the new season is going to be Farah Karim as she has been the flag bearer for the season 6 campaign. The surprising part about this leak is that there are no game files about Soap Mactavish which leaves us in confusion as to where he went.

Two extremely amazing guns which have been seen in Call of duty before are also going to make an appearance in the name of the R700 and AA-12. Talking about new maps, a new name ‘Alcatraz’ is being mentioned on the street .