The Minecraft Chroma Sky mod update brings a lot of new things to the game. It not only offers the best collection of mods but also a whole new Skyblock experience. Read our blog to know more about this update. 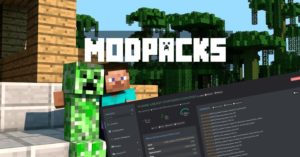 Developed by Mojang, Minecraft is regarded as one of the most successful video games out there. MC was created by Markus Persson in the Java programming language. After several early test versions, the main game was released as a paid public alpha for personal computers way back in 2009 and finally released in 2011 with Jens Bergensten who took care of the game’s development.

This game is highly liked for its fine blocky, procedurally-generated 3D world. It has infinite terrain where you can discover and extract raw materials, craft tools, and items, and build structures. Since 2011, Minecraft has been ported to several other platforms. It is regarded as the best-selling video game of all time. This game sold over a  record 200 million copies as of 2020 and it has more than 126 million active users.

One of the highly appreciated and unique mods, Minecraft Chroma Sky mod has released the V 1.0.7.

This mod adds new visually appealing dimensions to the game. Furthermore, it adds new mobs modified recipes and a new starting. The newly added progression system makes the game quite better. This amazing mod pack is filled with the best collection of mods you’ll ever find. It features mods like the Embers mod, which is known as a dwarven magic mod. The Embers mod features a smattering of technical and magical content. The Chromo Sky mod also features the Project E mod, where you have to discover powerful alchemical devices, tools, and items.

The mod pack further adds tons of popular mods like advanced  Rocketry, Calculator, Inspirations, and many more. You’ll find some classic mods like Tinker Constructs, EnderIO, Therma, and Mekanism too. In total, this mod pack contains more than 200 mods, a whole bunch of new quests, and highly optimized gameplay to take you on an amazing journey of Minecraft.

How to fix Chromebook "Error Setting up Printer" issue in 2021?