LG is known more for its household appliances than for its smartphones. But, slowly LG is trying to acquire the smartphone market too. The last few phones by LG such as LG Wing, LG G8X ThinQ were highly appreciated by the audience. And now, LG is preparing to launch a new phone under its K-series, LG K92 5G.

Today, i.e., On October 31, 2020, Bluetooth SIG added a new LG phone on its website. On the certificate, you can clearly see that the model numbers of this new device were given as “LM-K920AM” and “LM-K920TM”. A screenshot of the Bluetooth certificate is added below. 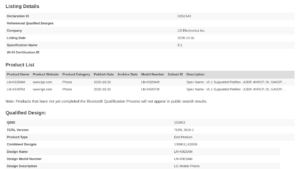 Earlier this smartphone appeared on FCC and in the FCC certificate, we can see that both the model numbers, “LM-K920AM” and “LM-K920TM” are associated with the same device, LG K92 5G.

The LG K92 5G was announced by LG on October 30, 2020. The FCC, Bluetooth, and Wi-Fi certification revealed that this device will come with 5G connectivity, NFC support, Wi-Fi 802.11b/g/n/ac support, and Bluetooth 5.1 support.

LG K92 5G comes with a large 6.70″ display. This device is powered by Qualcomm Snapdragon 690 and is backed by a 4000 mAh battery. Talking of the cameras, the LG K92 5G boasts a quad-cam setup which includes, a 64MP wide camera + a 5MP ultrawide camera +a 2MP macro camera, and a 2MP depth camera. At the front, you get a 16MP camera for selfies.

As this smartphone is now certified by the Bluetooth SIG website, LG might release this phone in a few weeks. This device is expected to be priced around 340 euros which roughly translates to 30,000 INR. We are continuously tracking reports related to LG K92 5G & will update you with more information whenever it arrives, so stay tuned! Follow our website to get technology updates as soon as we publish them.

Genshin Impact “Marvelous Merchandise”: How to complete the quest

Genshin Impact "Marvelous Merchandise": How to complete the quest