League of Legends is an isometric multiplayer online battle arena game in which the player controls a character with a collection of special abilities. The game was first released in 2009 for Microsoft Windows and Mac OS X. The game is free-to-play and is monetized through purchasable character customization. Although this game is being played worldwide and has gained popularity, it has some errors which are nerve-wracking. One of them is ‘Wild Rift error 10018’. If you are facing the same error and want to fix it, we have a detailed guide on ways to fix it in this blog. 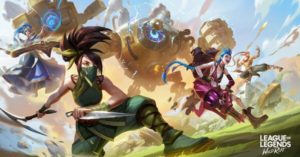 League of Legends is an isometric multiplayer online battle arena (MOBA) game in which the player controls a character with a specific set of abilities. There are 155 champions qualified to compete as of April 2021. Champions earn ranks by destroying enemies and gaining experience points (XP) over the course of a match.

Items are purchased via a shop menu in the main game mode, Summoner’s Rift, that is only available to players when their champion is in the team’s base. Each match is unique; levels and objects do not carry over from one to the next.

What is the Wild Rift Error 10018 in League of Legends?

Since some of the Europe West servers were down or forcing players to disconnect, both League of Legends and Wild Rift players were experiencing authentication problems and errors while attempting to play the game.

This message indicates that Wild Rift has trouble connecting to in-game servers. As of now, no server issues had arisen, still, players are stuck at the login screen, unable to get into the game. This has frustrated the players.

How to fix Wild Rift Error 10018 in League of Legends?

If using home Wi-Fi, you may want to make sure if there are too many devices connected which could be the reason for the error.

You can try rebooting your network to see if you can log in to play the game.

See if you can log in to play the game.

These 2 methods should have helped you fix the error. If not, contact the Wild Rift player support.