Is This Raze Nerf Sufficient?

After a game changing patch last time Riot surprises everyone with 1.08

Riot has delivered back to back patches with major updates and buff in the quality of play of Valorant. Two major issues reported from the time Competitive matchmaking has been public are the repetition of maps in one go and the ultimate abilities of the agent “Raze”. After getting a proper nerf in the previous updates, the community was still not satisfied as the raze sachet didn’t have any possible counterplays. 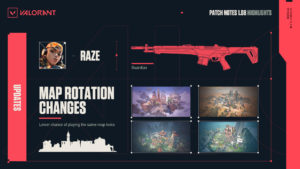 Following changes have been done to Raze’s Blast Pack:-

Guardian has also seen a tough time in competitive mode and the developers have stated that it cannot be compared with “Phantom” or “Vandal” but it should uphold its priority in low buy rounds. The following changes have been made in the Guardian:-

But for people who were frustrated with the same map-matchmaking had a sigh of relief after this patch. The developers have fixed this issue which will make the matchmaker de-prioritize the map you just played. Which means, For Example:- If you just played “BIND” there will be a less chance of your next map being it.