I know you really want to download Friday Night Funkin but are wondering whether it is safe to download or not. Let me clear the air. It is 100% safe easy to download this amazing game. 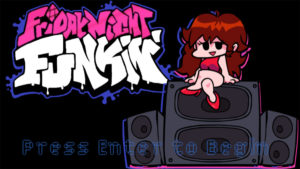 If you’re looking for a safe way to download this game, just click on the link below :

You do not have to worry about anything. It is absolutely safe and free.

Friday Night Funkin is one the best produced and artistic rhythm games developed by Canadian programmer Cameron Taylor also known as Ninja Muffin 99 in OpenFL. It is inspired by Dance Revolution, Rock band, PaRappa the rapper, and many of the New ground and Flash cultures. 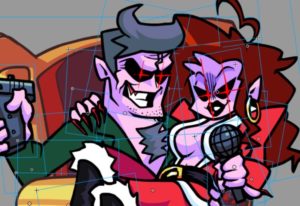 Your player has to pass through 6 weeks and also the upcoming 7th week which is leaked by the developer.

It’s the battle with the evil dad and he really doesn’t like the Boyfriend. The stage is set, the battle is up and damnn… Daddy Dearest has a pretty good voice.

Skid and pump are here to blow up the Spooky month. They come across Girlfriend’s parent’s house and Lemon demon the monster. Later, the monster rap battles with the boyfriend on the track titled “Monster”. Surprisingly Week 2 only has 2 songs instead of 3. However, the developers will re-add the remaining song at the later stage of the game.

Pico the hitman is hired by Daddy dearest to kill Boyfriend. But Pico has some other plans, with a gun in one of his hands and a mic in the other, he decides to have a rap battle with Boyfriend and fight it out.

This week is quite infamous for one of the hardest tracks titled “The M.I.LF. In this week, Boyfriend has to face Girlfriend’s mother known as “The Mom”. It’s the rooftop and the mom also has tracks like Satin Panties and High in her sleeves.

This rap battle commences in the Shopping mall during Christmas, where the Boyfriend has to battle with both the girlfriend’s parents who are holding Santa at gunpoint. This week stands for several cameos, especially from the Newground characters.

After the second song titled “Eggnog”, the monster decides to cast his spell by making his debut in the game with the song titled “Winter Horrorland” and takes over the mall.

Boyfriend and girlfriend take a toll on the PS1 dating stimulator and battle against “Senpai”. Senpai who appears to be a nice guy in the beginning, losses his calm during the second song and threatens them. Later, Spirit kills Senpai and reveals that he has been locked in the game due to Daddy Dearest and will use Boyfriend’s body to take revenge on Daddy Dearest. The Boyfriend beats Spirit and escapes the game along with his girlfriend. 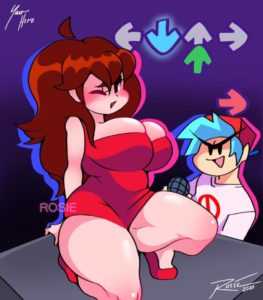 FNF is an open-source game making a room for several aesthetic and well-programmed mods.

Whitty Full Week & Silva gunner are some of the most popular mods in the game. While High spirits Ugh seems to be the hottest in the town. It showcases the battle between Tankman and the Boyfriend.

Are you ready to make this Friday Night Funkin? Download it now. It is 100% safe and free to play.