Only for China Users

Huawei launched its latest EMUI version , EMUI 11 V(Magic UI 4.0) at Huawei Developer Conference (HDC) on September 9,2020. The latest EMUI11 has amazing features like display themes, improved multi-screen system, consistent UI animations, always-on Display menu, Huawei share, Document scanner and much more. It was initially available only for Huawei P40 and Huawei Mate 30 series but the company has promised to extend it to large number of devices by 2021.

We have good news for the Huawei Mate 40 pro users in china. The phone was launched recently in China on October 22, 2020. As reported on the Chinese micro-blogging website Weibo, Huawei Mate 40 pro has just been updated to EMUI v11.0.0.130. The news came earlier today and it is seen that the major improvements and optimizations are done for the camera of the device.

Have a look down below at the screenshot of the post in Weibo. 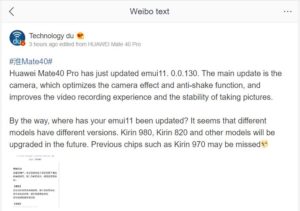 It is predicted that the different models will receive the different versions of EMUI 11. Kirin 980,Kirin 820 and other models are expected to be next devices to receive the update. Previous chipsets like Kirin 970 may be left out.

Various users have commented on the post saying that the new EMUI 11. 0.0.130 has enhanced the battery life and made system stable while some users are still waiting for the update. If you haven’t received the push yet then you can be an early adopter. Follow the steps below :- 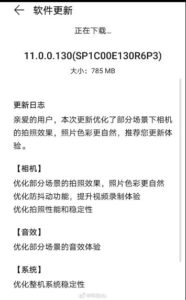 League of Legends (LoL): ADC and Bot Lane situation not better in Preseason

League of Legends (LoL): ADC and Bot Lane situation not better in Preseason