How to get Annihilator in Call of Duty: Mobile | Unlock Annihilator operator skill in COD Mobile

Call of Duty: Mobile is one of the most popular mobiles game these days and engages millions of active users daily. Tencent Games developed the mobile version of the popular first-person shooter franchise. So far, the creators of Call of Duty: Mobile have successfully managed to engage the interest of the players. Regular in-game updates bring new game modes, new weapons, and a lot more new content. 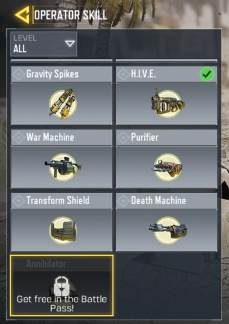 With the new Call of Duty Mobile season 6 update, the developers are introducing a new way to earn tier rewards. Earlier, players needed to complete the battle pass tasks to earn tier rewards, and now, players just need to earn Battle Pass XP. XP can be earned by playing Multiplayer and Battle Royale matches or by completing the Seasonal tasks.

Well, if you can’t wait to use the new operator skill, we recommend you to buy the Battle Pass and tiers to earn the reward. Or you can simply play matches and unlock it for free

How to Catch Rosalia Batesi In Animal Crossing: New Horizons