Google Play Store error code DF-DFERH-01 : How to fix it?

Google Play Store is your one and only destination for downloading the best and popular apps and games. It is also a place that offers music, movies, TV shows, and more. Google Play Store allows you to know the popularity of the apps. It displays the number of times an app has been downloaded. The download count will be a color-coded badge with special color designations for surpassing certain app download milestones. This includes grey for 100, 500, 1000 and 5000 downloads, blue for 10,000 and 50,000 downloads, green for 100,000 and 500,000 downloads and red or orange for 1 million, 5 million, 10 million and 10 billion downloads.

You can also submit your reviews and ratings for apps and digital content distributed by Google Play that are shown publicly. Ratings can be given on a 5-point scale. App developers can also respond to the reviews with the Google Play Developer Console. It had around 82 billion app downloads in 2016 and reached around 3.5 million apps published in 2017. Google Play Store was launched on 6th March 2012 and it was at first known as Android Market. 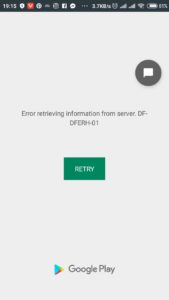 But just like other apps and services, even Google Play Store faces some errors because of which users have to face many issues. One such error that has been reported recently is the Error DF-DFERH-01. According to users, the error reads ‘Error retrieving information from server (DF-DFERH-01).

Well, if you are experiencing the same, there are a few things you can try to fix the issue by yourself –

League Of Legends (LOL) Error Code 9s: How to fix it?

League Of Legends (LOL) Error Code 9s: How to fix it?