But several players have been complaining about an issue in the game since the update rolled out officially. According to the users, they are facing connectivity issues with the game. And not only this, the connectivity issue is being detected for PC, PS4, Xbox and even on Google Stadia.

The Twitter handle of Ubisoft Support officially recognized this issue and posted a tweet about the same. According to the official statement, Ubisoft is aware of the connectivity issue that is being reported by several users.

Ubisoft also mentions that the concerned team is looking forward to resolve this issue. 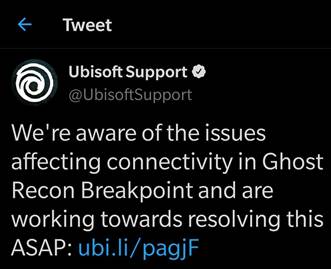 T-Mobile Outage : Network down with no internet & data services not working for many users

Google Fi down & not working : No internet or data services on Sprint & T-Mobile

Google Fi down & not working : No internet or data services on Sprint & T-Mobile