by Dharmesh Harshwal
in Samsung, Technology

The South Korean tech-giant Samsung has always pushed limit of mobile technology and set the standard for what the smartphone can – and should – be. The latest One UI 3.0 was launched by Samsung earlier this year on August with the Galaxy S20 series. Samsung planned to launch its new UI beta version on other smartphones too and the devices like Galaxy S10, S10+, S10e, Galaxy Z Flip, Galaxy Fold 2 were lined up to receive the beta update.

But it seems that the users of these devices have to wait a little longer to get the beta update. As per the information posted on Samsung Community app, the beta updates of One UI 3.0 for the devices has been postponed. The information was officially shared by the Beta Operation Manager earlier today. Have a look at the screenshot of the post below. 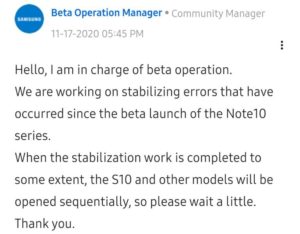 It seems that the beta launch for the Note 10 series didn’t work well for the users and same is the reason for postponement of the updates. The official has clearly stated that they won’t continue rolling out updates until the issues are fixed to some extent. Once the UI 3.0 becomes stables , the S10 and other models will receive the updates in phased manner.

Many users in reddit have posted the issues they faced in the new beta update. System slowdown, battery draining and app crashes are some major issues faced by users while some of them said that everything is good enough for 1st beta update. Have a look at some of the mixed reactions of users.

The latest One UI 3.0 is based on Android 11. It has got some major improvements and optimizations in home screen, lock screen, Always on Display (AOD), camera and many more. Some newly added features include Quick panel, Samsung Dex, Digital wellbeing and parental controls, etc

The exact date has not been mentioned by the Samsung official regarding the update but we can expect it next week. We will keep you updated and please share the article to those who might find it helpful.