One of the most awaited mod is here. The new Friday Night Funkin Miles “Tails” Prower (Over GF) mod has Tails replacing GF as a sidekick. Read our blog to know more about this mod. 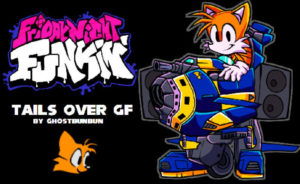 FNF is regarded as one the best rhythm games ever to exist to date. It offers you a great experience of magnetic music, wavy beats, disruptive charts, and artistically created characters. This game is developed by Canadian programmer Cameron Taylor a.k.a. Ninja Muffin 99. The story of this game revolves around the character “Boyfriend” who has to fight strange characters in a rap battle in order to get his girlfriend.

You need to pass multiple levels termed “Weeks”, where each week consists of 3 songs except the second week. You’ll have to pass 6 weeks and also the 7th week which will be released soon.

Furthermore, it is an open-source game that leaves a mighty room for people to show their coding and composing skills and drop creative mods in the game.

Miles “Tails” Prower is a fictional character from Sega’s Sonic the Hedgehog series and is also the main character’s best friend and most recurring ally. The character’s name “Miles Prower” is derived from a pun, “Piles per hour” which is a reference to the famed speed of Sonic the Hedgehog. He is also a very skilled pilot and can fly by spinning his tails like a helicopter rotor. You might have seen him flying in multiple video games and TV shows produced by SEGA.

Miles also features in his own comic books, cartoons, spin-off series, and films. He is the second character in Sonic’s history to consistently getting featured by Sonic’s side in the series. He is a two-tailed kitsune and a mechanical genius. The character, Miles, debuted in a number of spin-off games like Tails and the Music maker, Tails Adventure, and Tails’ Skypatrol. The games were created for Sega Pico and Game Gear respectively. I an official poll from Sega in 2009, Tails was rated the third-most-popular character in the franchise, just behind the main character Sonic and Shadow.

After lots of requests from the fans, the developer of this mod has dropped this amazing mod. It features the famous fictional character Miles “Tails” Prower from the Sega Sonic. In this mod, you won’t be fighting for your love interest but you will be fighting for your buddy. GF is being replaced by Miles “Tails” in this mod who acts as a hype man carrying the speakers around. It also has the popular character Sonic the hedgehog which adds a sparkling joy to the Sonic fans.

So, get ready to see your favorite character in action and Enjoy!