Forza Horizon 5 Map: What to Expect?

Forza horizon is a very trendy and gripping title-based racing video game published by Microsoft. Forza Horizon 4 has been much talked about and played on every gaming console all over the world. While FH4 being famous, rumors about Forza Horizon 5 has taken all over due to the leaks in the map of the game. Along with the maps of the game, some new features were also leaked by the insiders. Aren’t you excited about what these new maps are enclosed with? We have got it all covered in the blog on what to expect from the Forza Horizon 5! 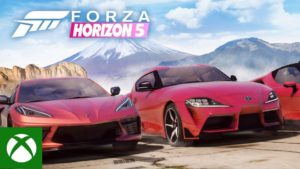 Forza Horizon is a racing video game set in the fictionalized world of Great Britain. It was initially developed by Playground Games and published by Microsoft Studios. The game features miniature versions of cities like Edinburgh, the Lake District, Ambleside, and the Cotswolds, and Bamburgh.

The player can use the route creator feature within the game to form completely customized routes on the map of the city. The fun thing is that the game can be played offline too!

The game contains over 700 licensed cars to which the players can avail themselves and conduct races. There is an option of in-game purchases using the game currency to buy and collect various items.

Forza Motorsport is under development for Xbox Series X, but there is no official confirmation about its release or its publish on other gaming consoles. Many players and users are predicting that Forza Horizon 5 should come out later this year. Fans and players are eagerly waiting for the game to experience new features and exciting maps.

Some screenshots are circulating on Twitter among the Forza Horizon 5 fans, depicting the Yokohama, Gunma, Fuji, and Gunma areas. These areas are originally from Japan. As a result, it is reasonable to assume Forza Horizon 5 to have a map, with the map’s location-based in Japan. The developers can choose some cool spots from various regions of Japan to make it seem awesome while playing.

Along with the screenshots that were leaked about the Japan Map, there has been some Twitter gossip about the Mexico map being added to Forza Horizon 5.

Although these screenshots were leaked and tweets have been flying about the map rumors, there are a lot of new features of the game yet to be discovered. Once the game comes out, the features will also unveil and excite you more!