Recently, several Fortnite players have been reporting an issue in the game. Users mentioned that Skye’s “Block damage with a Kingsman” Challenge is not tracking progress for them. Well, if you are facing the same issue, fret not, as you are not alone.

The official Twitter handle of Fortnite Status acknowledged this issue officially. Team Fortnite also mentioned that the concerned team has identified the issue and investigation is in progress.

We’re aware that Skye’s “Block damage with a Kingsman” Challenge may not track progress for players and are investigating. Thank you for the reports!

Stay tuned, we will keep you updated with the latest news and updates on the same.

Some Fortnite players are still having issues.

We found a card named “Block damage with a Kingsman Challenge not tracking progress” on the board.  And it looks the issue has not been resolved yet.

The current status of the issue says, “Fixed in Next Game Update”. This means that it would take some time to resolve this issue, and the fix might come with the next patch update.

Check out the screenshot of the Trello board – 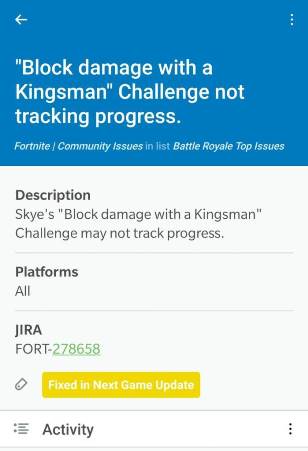 Stay tuned. We will keep you updated with the latest related news and update.

Earlier in this post update, we mentioned the current status of the Block damage issue with Kingsman. We also mentioned the details included in the official Fortnite Trello board. According to which, fix to the issue is coming with the next game update.

Well, according to the tweet by the Fortnite leaker @ShiinaBR on April 24, Fortnite would get an update this week. He also mentioned that the new update would carry patch version 12.50.

Another leaker named @AlyansLock has posted the screenshot of the latest update of FortniteDevPlaytestD highlighting the build date of April 24.

Fortnite version 12.50 is coming this week. With the new patch, developers will specifically target the block damage issue with Kingsman, which surfaced online on April 20 for the first time.