Fortnite Latest Patch v14.30 is Underway As We Speak

Epic Games have announced a new update which is underway as we speak. 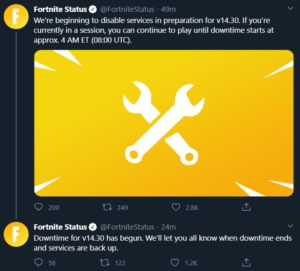 As of now, the servers are down and it might take a few hours as this patch would take more than a couple of hours, unlike the minor updates and fixes. As we know that Epic hasn’t shipped many updates during the first two seasons of Chapter 2 and due to the addition of competitors like Valorant which is not even a battle Royale, they have thought that it is about time to buckle up. Epic was doing two major updates per week in the last season and this season also they thought of something similar. However, there was no update last week which would direct us that there have been at least three weeks between the last update and today’s new update.

Although there has been a long time frame between the updates, the quality of updates has been top-notch and undeniably better than the previous season. We can see major Marvel fusions in the game as new locations in the name of Stark Industries.

In this new patch, we can expect Daredevil abilities to be added to the game as they are leaked by data miners of the game on Reddit almost daily. Fortnite developers have not confirmed anything online so nobody is sure about that there will be a daredevil hero. Fortnite week 8 and week 9 challenges were leaked along with brand new Fortnite skins which also hinted that there might be more to this than we think!