Fortnite is an online video game developed by Epic Games and released in 2017. It is available in three distinct game mode versions that otherwise share the same general gameplay and game engine. Fortnite is available across all platforms – Windows, Playstation 4, Xbox One, Nintendo, and also on Android and iOS mobile platforms.

Recently, several Fortnite players have been posting about an issue on various social media platforms. According to the users, Deadpool Week 7 Challenges are missing and not visible to them. Well, a lot of players were reporting the same issue. And if you are facing the same issue, fret not, you are not the only one.

Fornite recently responded and recognized this issue on official social media handles. In the first tweet, Fortnite Status’s official handle posted that the concerned team is investigating issues with missing Deadpool Week 7 Challenges for some players.

After an hour, another tweet was posted, and the creators mentioned that the investigation is in progress. 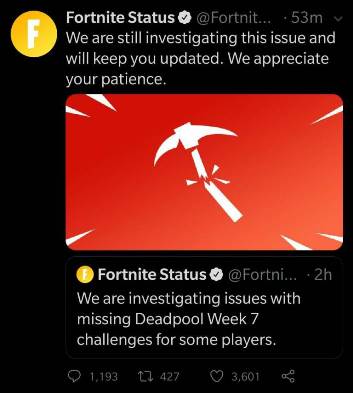 Well, many players are still having issues with the Deadpool Week 7 Challenges. Stay tuned, we will keep you updated with the latest news about the same.