Stealing is a classic command in Final Fantasy and the game feels incomplete without it. For stealing in FF7 remake you need to get your hands on the steal materia which its own dedicated piece of materia. After that, you need to learn which enemies give you the best items.

You consume an ATB charge when you steal so you need to make use of it prudently. Learn the best items you can get from stealing and you will never waste an ATB charge. There are also some special rare items that you don’t want to miss. So go on with the guide.

How to Get Steal Materia

First things first, for you to use FF7 steal command you need to get your hands on the steal materia. For that, you have to go complete Chadley’s Battle Intel Report Mission 7. Chadley is the Shinra reporter you meet in Chapter 3. After it is completed, it gives you access to buy Steal Materia. Though the mission won’t be available until Chapter 8, it is quite easy to exploit the various magic elements in that mission.

Once you have the steal materia, you can channel your thrifty side and get to work. It’s a single-level materia, and it doesn’t level up. Steal Materia adds a command of steal to your abilities menu. It takes an ATB point to steal and there is not a certainty that you will steal any item. It works much better on enemies that have low hp or are in stagger state.

So which enemies do you need to steal from? Use Assess Materia, which reveals the strength and weaknesses of the enemy. You already need to hone the habit of constantly assessing enemies for weaknesses anyways. 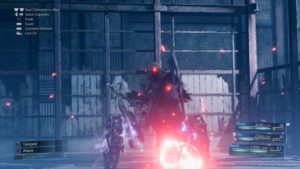 Enemies you should steal from

Eligor, the Chariot-riding ghost boss at the end of Chapter 11, has a weapon you can steal. The weapon is Aerith’s Bladed Staff, and Steal is the only way you can obtain this weapon in the whole game. Either you miss it right now or you take it if you miss it you will have to finish the game first to get a chance to fight Eligor again.

When in between the fight Eligor drops his staff, that is the opening you need to steal the weapon. You can spend up to 3-4 charges if it doesn’t work the first time.

Have fun Stealing! Hopefully doesn’t make me a bad person for saying this.