ABOUT FIFA Mobile: FIFA Mobile is an association football simulation video game developed by EA Mobile and EA Canada and published by EA Sports for iOS and Android. It was released worldwide on 11 October 2016, for iOS and Android. Microsoft Windows was also included until 2017. It was announced on August 16, 2016 during Gamescom 2016.

Today, the developer team of FIFA Mobile has rolled out the new content update to the game. With this update, the new FIFA Team Of The Week will be available in the game.

Well, where all FIFA Mobile fans are waiting for the new TOTW, EA has officially stated that the content update for FIFA Mobile will be delayed.

According to the tweet by the official handle of FIFA Mobile, the TOTW Content Update will be delayed because of technical issues. 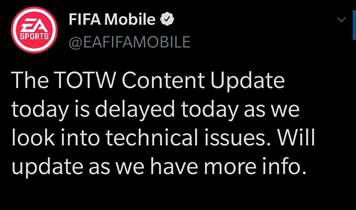 Well, there are no other details of the issues for now, the publisher hasn’t mentioned any details about the issues.

But, we will be updating you with the latest related information. So, stay tuned.