I’m sure you might have encountered this issue called Error code 38 while playing Call of Duty: Modern Warfare. Read our blog to know what is Error code 38, why does it occurs, and how to fix it. 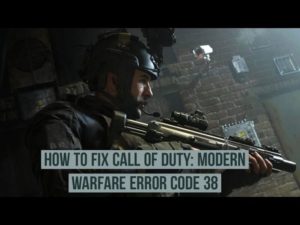 Modern Warfare is a first-person shooting shooter video game published by Activision in 2019. It is the sixteenth installment in the Call of Duty series and also called a reboot of the Modern Warfare sub-series. This game was released for Windows, PlayStation 4, and Xbox One on 25th October 2019.

What is Error code 38 in Modern Warfare?

Well, it is difficult to explain what truly Error 38 is because the developers are still trying to find the details about it. The bugs that cause this error usually appear on or around the time when the game gets its updates. It prevents the users to continue their online gaming activity. The error code crops up outside of the game’s update schedule, which hints that it is due to a local hardware issue.

When does it occur?

Error code 38 is an error that occurs when the users are trying to start or join the game. This could be related to the client-side console hardware problems.

The number one thing we will ask you to do is to keep everything up to date. Make sure your game and the gaming consoles are updated timely.

2. Restart the game and console

If your game isn’t working properly just restart your game or the console. Yup, that’s it. This is a common tech-help advice running all over the world. Usually, this tiny hack allows the game software to connect to the servers and fix the ongoing issue. After you have finished restarting it, access the game again to check if the issue has been solved or not. We hope you get lucky with it!

The last thing you can do is to just restart your internet router. Hopefully, your issue might get fixed this time. If everything doesn’t seem to be working for you, we would suggest you to contact the game developers for support.

Because the big players too need some back sometimes 😉