After Dota 2 cancelled the 2019-20 Dota Pro Circuit (DPC) season due to the global COVID-19 pandemic, there was a lot of secrecy about when it would resume. Valve after many months spoke about it and only said that there are no specific dates for the return of the tournament because the whole panorama was uncertain.

This seriously annoyed the fans, as many other titles made efforts to keep their games afloat such as League of Legends that will hold its World Championship, Worlds 2020, this year in the city of Shanghai, China. Finally, Valve has ruled with a statement. 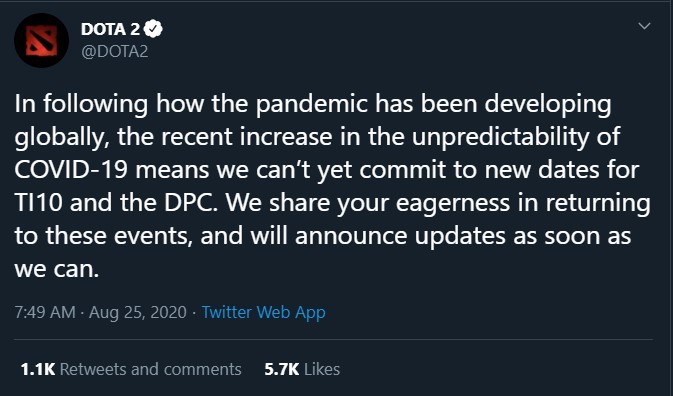 Valve posted an extensive blog posting their plans for the near future and responding to community criticism. The reason for the postponement and inaction of the company was the coronavirus. Dota 2 developers were unable to quickly adapt the competitive Dota system (DPC) to the new conditions and decided to postpone it until a later date, giving freedom to tournament operators.

The developers are planning to launch the new Dota Pro Circuit (DPC) season in January-February 2021. By that time, Valve hopes that the tough restrictions associated with the coronavirus pandemic will be lifted. Then developers will be able to hold Majors with teams from all regions.

Until then, the Dota 2 competition calendar will be occupied by tournaments from third-party organizers. Valve will support these organizers financially. Thus, at least four events in Europe / CIS and three in China are already planned for the rest of the year.

Most likely, according to Valve, The International 10 will take place in August 2021 in Stockholm. As a reminder, the championship prize fund has recently exceeded 35 million US dollars.

On September 15th, Valve will change the Dota 2 license. After which third-party streamers wishing to stream tournaments will be required to fulfil a number of conditions. The conditions will be agreed to by the competition organizers beforehand. The company told about this in the official blog.

The tournament operator will get the right to oblige a third-party streamer to add a championship sponsor advertisement to the stream. Another option will be to add a delay to the stream. According to the company, the innovation will allow the authors of the broadcasts to feel more confident. That will also safeguard the organizers’ key interests.

The new Windranger arcana came out just now, you can check out the post here.