Disney+ is a leading online streaming service in today’s world. It has over 100 million subscribers. Disney has used the impact of its major intellectual properties like Star Wars, Marvel, Pixar, The Simpsons, and other animated classics for giving a tough competition to Netflix, Amazon Prime Video, and more for its own slice of the lucrative streaming market. Disney+ was launched on 12th November 2019 in the United States, Canada and Netherlands followed by a week later in Australia, New Zealand and Puerto Rico.

In December 2019, an announcement was made that Canal+ will be the exclusive distributor of Disney+ in France. The launch in France was delayed pursuant to a request from the French government to conserve network capacity due to the Covid-19 pandemic placing extra strain on communications networks. It was later made available in European countries in March 2020 and in India in April with Star India’s Hotstar streaming service. It was later rebranded as Disney+ Hotstar.

Disney+ was praised for its content library but it has also been criticized for the occasional technical issues. Ten million users have subscribed to Disney+ by the end of its first day of operation. It had 100 million subscribers since 9th March 2021. 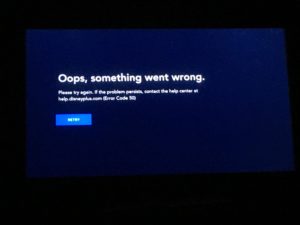 But recently PS4 users have reported an issue related to Disney+. Users said that they have been experiencing an error called the Error Code 50. If I have to tell the meaning of this error, it simply means that users cannot access Disney+. The access means users cannot open Disney+. Most of the users have complained that they are not able to launch Disney+ on PS4 because of Error Code 50. Some also said that although they were somehow able to launch the app, it showed the Error Code 50 and exited by itself.

Users also said that sometimes the error pops up in between when they are scrolling the app or watching any content. If you are experiencing the same while using Disney+ on PS4, there are a few things you can try to fix it by yourself –

Disney Plus (+) app crashes on Samsung Smart TV : How to fix it?