Previously we saw Jin Woo crushing ant king in most of his domains. What else can you expect from the shadow monarch? Find out in this week’s article below. Warning! Fight spoilers up ahead. We haven’t included any predictions, these will be strong spoilers of chapter 104. So, read at your own risk.

The King, now crippled, spiraled back towards the ground. But even as he came hurtling down, his mind raced to find an escape from this crisis.

Power. Speed. Poison. None of them were effective against his opponent.

‘Is there nothing I can best him with?’

In his moment of desperation, the Ant King struggled for answers. He found only one:

Waves upon waves of jet-black ants began converging on their location from all sides, sprung into motion by the King’s bellowed command.

It was as if darkness itself was threatening to engulf the field of battle.

‘What do you think, human?’

The King roared endlessly in an effort to restore his fallen pride and boost the morale of his soldier subjects. When he was finally finished, he continued to glare at the human in breathless defiance.

The enemy had waves of his own.

Jinwoo beckoned his army of shades from the stygian abyss that was already starting to congeal in vast pools on the cavern floor. The “Domain of the Monarch” that had been invoked previously was still in effect.

So, it seems Jin Woo decimated our little king in his own games now comes the battle with numbers but… sadly for the ant king Sung is actually most powerful when it comes to number games. Sung Jin-Woo shattered the hollow pride of the ant king. This itself tells us how ruthless as well as exciting Sung can become when it comes to fighting. But the clock is ticking!!

Shattered Pride: The fall of the best Ant

The Ant King found himself quivering.

‘This is the human‘s soldier?’

Hundreds of his own warriors had been vaporized in less than a minute.

For the first time, the king of ants faced true terror.

It dawned on him that this whole time, he had been feebly struggling against an immovable wall. There was nothing he had that could overcome his enemy.

He had been utterly defeated.

The Ant King shuddered and turned away from his oppressor.

‘Far away, I must get far away from that human!’

The only goal was to survive.

The king of ants hastily tried to mend his wings using a healing skill he had yet to perfect.

It had never occurred to him that he would ever need such a skill.

In an instant, he was flattened against the cavern floor, ground into the earth by an overwhelming force.

His eyes bulged with exertion as he tried in vain to budge even a little bit.

Sticky, blue-green fluids spattered in all directions as the king of ants was repeatedly pulverized into the ground. Jinwoo, who was using “Ruler’s hand” like a flyswatter wielded by god himself, quickly closed the distance.

Well, now we know who to call when your house needs pest control. Do not worry Sung Jin-Woo Pest Control will come and take actions of all those irritating pests. 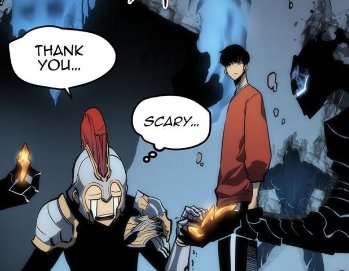 Tusk emerged next to Jinwoo, a short distance away from the fervent battle taking place around them.

Jinwoo grabbed the Marble of Avarice and handed it to Tusk.

But before he let it go, he gave the orc mage a stern warning.

“Only the ants. If your flames singe so much as a hair on any of the hunters, don’t expect to be summoned again. ”

The silent orc nodded in affirmation. Moments later Tusk, now towering over the battlefield in his “Song of Giants” form, spewed forth a terrible torrent of flames at the ants.

‘That flame grows more intense every time I see it . . is it because he’s been leveling up?’

It was a familiar sight for Jinwoo, but for the hunters around him, the spectacle engendered a decidedly different set of reactions.

“I-is that a summon? You’re telling me that’s—”

A dumbfounded Lim Tae-Gyu croaked as he pointed at Tusk. The other hunters could only gawk and stare, but they were all thinking the same thing.

‘That thing is someone’s summoned?’

Yes, by all outward appearances, Jinwoo had it on a tight leash, but in terms of its capabilities that was no average summoner’s pet. In fact, wasn’t it closer to some kind of power-drunk demon?

Either way, the ants crisped up nicely in the roaring flames.

Do you know what happens when a giant-sized titan has abilities like that of a flame mage and berzerk? Well, frankly tusk is more of that kind. Even Jin-Woo is wary of his own soldier combined with that marble this giant spews big flamy torpedos!! Is there a possibility of Jin Woo’s soldiers getting out of control? We have seen Jin Woo’s Arise getting failed when he tries on a high-level monster.

It was a powerful magic beast. He wanted to make him a shadow soldier no matter what. And the first step in doing that was to kill him.

The king of ants, head half-buried in the ground, locked eyes with Jinwoo, and Jinwoo saw that the King was terrified.

With great effort, the Ant King lurched himself up on all fours and began to crawl away from Jinwoo. The unflinching bravado of the King had long since withered away. Now he was nothing but a bug.

Daggers in hand, Jin-Woo casually walked up to the fleeing king of ants and used “Vital Stab”, no . . . “Mutilate”.

But his joy and excitement were cut short.

He turned to see Baek Yoon-ho with a grim look on his face. Jinwoo ran over. The other hunters, who had been similarly caught up in the excitement, also turned and converged on Baek Yoon-ho’s location.

There was no time.

At that moment, Jinwoo realized what had to be done to save Cha Hae-in.

Jinwoo, who had been kneeling beside Hae-in to better assess her condition, looked up at the cameraman as he got back on his feet.

“Can you turn off the camera for a moment?”

As stated earlier, it was a race against time for Sung we see that even though the enemy was slain still Cha Hae In is still left to be treated. What will Jin Woo do? What will happen to our ant king will he become one of the shadow soldiers or will “ARISE” fail on him.

That’s all for Solo Leveling Chapter 104 spoilers. Thanks for reading, and stay tuned, as we will be back with spoilers for the next chapter next week.

Chapter 104 is expected to release on February 14, Thursday. In the meantime, let us know what you are expecting with the upcoming chapter. And if you got any questions for me, ask me in the comments section below. I’ll love to listen to your theories and expectations.