One of the most awaited sports video games, “Captain Tsubasa: Rise of New Champions DLC 2” is soon to be released. Here is everything you need to know about this game. 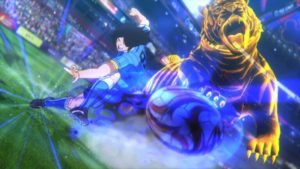 Rise of New Champions is regarded as one the best Japanese association football sports video game. It is developed by Tamsoft and is published by Bandai Namco Entertainment. It is available on PS4, PC, & Switch. RNC is based on the popular anime series titled “Captain Tsubasa.

The second installment of Captain Tsubasa: RNC will be introducing some really interesting new players. There would be 3 New characters. Two of them be Japanese players and one would be A Saudi prince. The name of the new Japanese players will be Aoi and Hino. Whereas, the name of the Saudi prince will be Owairan. All of them will appear in the World Youth story arc.

Shingo Aoi is a second-year junior high school student who is inspired by Tsubasa. Aoi is always cheerful and never gives up. He has the ability to run through the midfield at a lightning speed.  Aoi is a midfielder who specializes in speed and has a skill that allows him to accelerate every time he passes by an opponent.

This player is built with super strong power which is equal to that of Hyuga!

He has moves that make use of his power and skill and activates in the early stage of the game. He is indeed a very aggressive player.

This Saudi royal player is good at both defense and offense. He is an above-average player with a very high skill level. Despite being a Defender, Mark has an amazing offensive ability.

In an official statement, Bandai Namco Entertainment confirmed that the Captain Tsubasa: Rise Of New Champions – DLC 2 will be released in the spring of this year.