Call of Duty: Mobile is the most popular first-person shooter mobile game. The game is developed by TiMi Studios and published by Activision for Android and iOS. It was released on October 1, 2019.

Well, today several Call of Duty: Mobile players posted about an issue on various social media platforms. According to the players they are not able to purchase COD Points in the mobile version of Call of Duty.

The users also mentioned that they are facing this issue in the iOS version of Call of Duty: Mobile. Well, no issues have been detected in the Android version as per now. Well, if you are having the same issue, fret not, you are not alone.

This issue has been addressed officially by Activision today. Some players also mentioned that the issue occurred after the small patch update that the game received yesterday, but Activision hasn’t mentioned that.

Activision in the official statement mentioned that the team is aware of the issue in purchasing COD points in the iOS version of Call of Duty: Mobile. You can check out the official Twitter post for more information on the same. 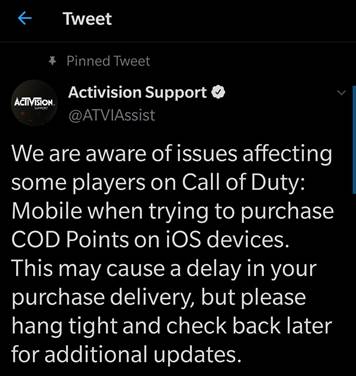