Call of Duty: Modern Warfare is a 2019 first-person shooter video game developed by Infinity Ward and published by Activision. The game was released on October 25, 2019, & since then it is running strong. The game recently received a new update with patch version 1.20 & which brought a lot of improvements and bug fixes to the game.

Since the arrival of season 3 in Call of Duty Modern Warfare, a lot of users have been reporting an issue with one of the season 3 challenges. According to the reports, the kills count for the claymore kills in Modern Warfare is broken and not tracking properly.

Well, if you are facing the same issue fret not, as you are not alone. The same issue has been reported by several Modern Warfare players.

The issue has already been recognized officially by Infinity Ward. In the official Call of Duty Modern Warfare Trello board, a card can be seen which describes this issue. And according to the Trello card, the current status of the issue is “In Progress”. 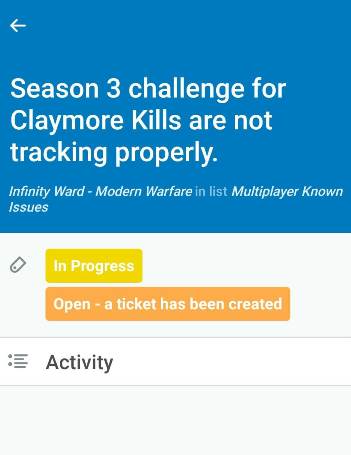 We are expecting the fix for this issue in the next update. Till then stay tuned for the latest related news and updates.