Destiny 2 is a free-to-play first-person shooter online multiplayer video game developed by Bungie. The game was launched for PlayStation 4 and Xbox One on September 6, 2017, followed by a Microsoft Windows version the following month. The game is set in a mythical solar system and has features PvE, PvP and other modes. It has four post-release contents out of which Forsaken and Shadowkeep are the large expansion.

Bungie rolled out the hotfix 2.7.0.2 for Destiny 2 a couple of weeks ago which brought tons of bug-fixes and improvements in combat systems, activities, and bounties.

Well, today, Bungie has announced the new update for Destiny 2. The upcoming Destiny 2 update 2.7.1 will roll out tomorrow across all platforms. Players can expect several improvements and new content with the upcoming update.

The developers have posted an official schedule for the Destiny 2 update 2.7.1. The procedure for the update will start on January 28, 2020, Tuesday at 8:00 PM PST, where the game will go under maintenance for the new update. 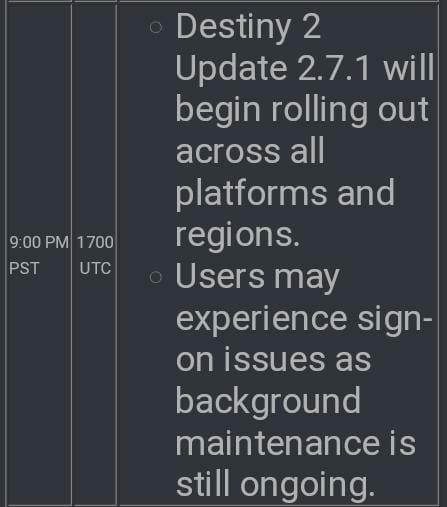 Finally, Destiny 2 update 2.7.1 will start rolling out at 9:00 PM PST, Tuesday, across all gaming platforms. And servers will be available at 11:00 PM PST after undergoing the maintenance.

Stay tuned, for the official patch notes and other details for the upcoming update.

[Official Update] Google Drive down (not working) for many users