Friday Night Funkin is one the best rhythm game filled with disruptive gameplay and catchy songs. It is an open-source game thereby leaving a lot of room for various aesthetic and well-programmed mods. There are tons of mods like High Spirits Ugh, Friendly Friday Funkin, Friday Night Funkin is V.S Whitty Full Week to name a few. 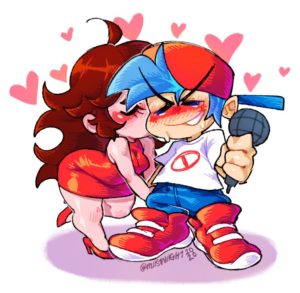 This rhythm game is quite popular for being an open-source game. That means anybody with good coding, animation, music skills can mod this game. So here are some of the best mods of Friday Night Funkin :

One of the most popular mods is the Friday Night Funkin V.S Whitty Full Week mod. This mod creates a fan-made stage of the game. It introduces a character named “Whitty”, who is 20 percent human and 80 percent unknown (probably robot). He is a hothead rockstar with a dark blue jacket and orange pants. Whitty has a brief history with Girlfriends’ parents. This amazing mod is codded by Kale and the composer is Sock Clip.

It was highly appreciated for being the first mod to add a fan-made stage and fulfilling lore to the game. But the game was criticized too for its third song, Ballistic, for being so hard to the point that the developer too couldn’t battle the song perfectly without using the bot. Though everyone loved it and it became one of the best mods in Friday Night Funkin.

This interesting update replaces Week 1, 2,3 &4 with fresh remixes of the original music. It also recolors all the characters to give a new look. It also comes with another version without the recolors to maintain compatibility with other mods. The author of this update is Rozebud and the music and charting are done by Jads.

In this unique update the character colors, songs, icons, backgrounds are overhauled. This mod also includes custom songs, brand new SFX, and amazing themed visuals to give this game a more futuristic look. This mod is produced by Jellyfish.

Shadow Mario has created this mod which already has more than 421k downloads and is considered one the best mods of the game. This mod adds a new dimension to the game by making it multiplayer. That means you can now play with your friends. If you don’t have friends with whom you can play this game but want a bigger challenge, you can play with a local multiplayer mod.

Here are some more good mods you can download in Friday Night Funkin :

How to Fix IRS website/app Refund Status Error : Information Does Not Match